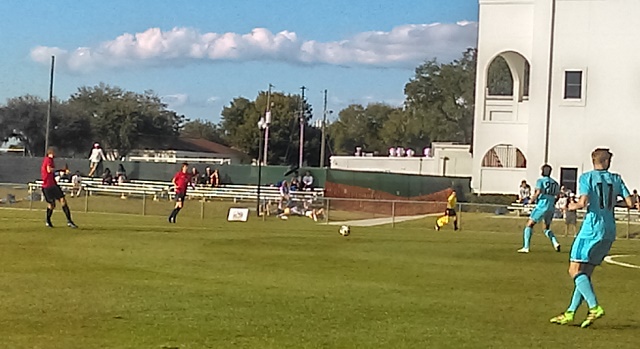 MONTVERDE, Fla. – The standout performers during Thursday’s action at the Montverde Academy Soccer Tournament were as diverse as the schools they represent and the situations from which they have come.

A native of Uganda who ended up in Virginia and now boards at Montverde set up one goal and scored another;

Every year the MAST brings together eight of the nation’s top winter-playing teams, and there’s never a shortage of story lines. In Thursday’s opening round, two matches went to shootouts; three out-of-state teams advanced and in all four matches the higher ranking team won.

SIMA FAB 50 No. 1 Montverde Academy (Montverde, Fla.), seeking a fifth straight FAB 50 national title, scored three times in the first 21 minutes then turned to the bench in a comfortable 3-0 victory over No. 15 Watsonville (Calif.). FAB 50 No. 23 St. Paul's (Covington, La.) edged No. 24 Gulliver Prep (Miami, Fla.) in penalty kicks for the second straight year, this time after a 1-1 match. FAB 50 No. 4 The Woodlands (Texas) kicked off the event with a shootout win over unranked Tampa Jesuit (Tampa, Fla.) after a scoreless match. And, regionally ranked Paramount (Calif.) rolled over unranked Pembroke Pines Charter (Pembroke Pines, Fla.), 6-1.

Friday’s semifinals pit The Woodlands against Paramount, and Montverde against St. Paul’s – a rematch of last year’s final. The consolation matches have Tampa Jesuit facing Pembroke Pines in an all-Florida clash, and Gulliver Prep taking on Watsonville. All matches will be live-streamed on TopDrawerSoccer.com, starting at 3:45 p.m. EST.

F Rodrigo Almeida, Montverde Academy (Fla.), Jr.: He is a technically tricky player and tough to defend. He made a run to get on the inside of a defender to receive a pass and then finished for Montverde’s first goal.

MF Santiago Burgos, Gulliver Prep (Fla.), Sr.: Burgos had a strong outing, controlling play in the midfield in the second half and serving up a lot of balls to get teammates into attacking positions.

GK Bronson Cast, The Woodlands (Texas), Jr.: Cast is a very athletic keeper and definitely a gamer. The Woodlands, which uses a goalkeeper rotation with three players, sent multiple keepers out for the shootout, but Cast declined to give way to a teammate after he made the first save. His play in the shootout following a scoreless match earned The Woodlands a spot in Friday’s MAST semifinals.

F Kizza Edward, Montverde Academy (Fla.), Sr.: Edward, who is uncommitted, holds the ball exceptionally well and is an opportunistic goal scorer. On Thursday, with is back to the goal and few options, he found teammate Shea Curry who then slotted a pass to Rodrigo Almeida for the first goal in Montverde’s victory. Just minutes later, Edward scored a goal of his own.

F Truman Gelnovatch, Gulliver Prep (Fla.), Jr.: Gelnovatch scored Gulliver’s goal and showed why he is emerging as a top 2018 high school recruit. He was able to run at opponents and create opportunities. If not for the play of St. Paul’s defenders and keeper, Gelnovatch easily would have had two or three goals.

F/D Francisco Gonzales, Watsonville (Calif.), Sr.: Gonzales started the match as a forward, ended it as a center back. Needing an offensive punch, Watsonville put Gonzales in the attack this season, but on Thursday, he needed to retreat to his traditional position to help end Montverde’s scoring binge. In fact, after Gonzales moved back Montverde did not score the rest of the match.

GK Tim Gyenis, Tampa Jesuit (Fla.), Sr.: Gyenis came up with several big-time saves to keep the match with The Woodlands scoreless before the Texas opponent was able to win in the shootout.

MF Joshua Jackson-Ketchup, Montverde Academy (Fla.), Sr.: Jackson has top-class speed and was able to get behind the Watsonville defense. The right-sided player netted the final goal in Montverde’s victory. Like Edward, he is being courted by several ACC programs, but remains uncommitted.

GK Connor Jones, Montverde Academy (Fla.), Sr.: Admittedly, any Montverde Academy keeper faces few chances. But when they occurred Thursday, Jones came up big, including a diving save to his right to snuff out Watsonville’s best scoring chance. Jones is committed to Virginia.

D Noah Kurtz, Tampa Jesuit (Fla.) Jr.: Kurtz was a hard-nosed defender who made several quality tackles. He can play any of the back four positions or as a center midfield.

MF Wesley Mitchell, The Woodlands (Texas), Sr.: Mitchell converted the game-winning penalty kick for The Woodlands, but well before that he was creating chances during regulation.

MF Nicholas Pekel, The Woodlands (Texas), Sr.: The Montevallo commit constantly made nice services and his long throw-ins were a bonus.

F Christian Perez, Paramount (Calif.), Sr.: Perez was nearly cut from the high school team a year ago because of his past, according to his coach. Instead, he has emerged as the team’s top offensive threat and a changed person. Perez scored three goals as Paramount punished Pembroke Pines Charter 6-1.  Perez sustained an ankle injury after his third goal but is expected to play Friday.

D Philip Pierce, St. Paul's (La.), So.: One of several talented underclassmen in St. Paul's lineup, Pierce was constantly cleaning up plays. He was consistent the entire match, even when Gulliver started to ramp up the pressure.

MF Royce Pope, Tampa Jesuit (Fla.), Sr.: Although known for his scoring, Pope role Thursday was setting up goal scoring chances. In fact, he created or had a play in almost every Jesuit chance during the match.

D Jesus Salazar, Paramount (Calif.), Sr.: Although he's 5-9, he plays much bigger. He was solid on defense and provides leadership and communication that makes it work for Paramount.

GK Kyle Schmitt, St. Paul's (La.), Jr.: Schmitt picked up right where he left off in 2016 at the MAST. The junior keeper made to diving stops to help St. Paul’s edge Gulliver Prep in penalty kicks for the second straight year. St. Paul’s has never outright won a match at MAST. All three of its victories have come in shootouts, and all three with Schmitt in net. Schmitt was put under pressure in the second half Thursday and came up with several stops, including a well-positioned punch over the goal late in the game to keep the match tied. In regard to making the first PK save, Schmitt said, "Yeah, I was a bit giddy inside, but I knew it wasn't over. I have faith in our shooters to do their job, and they have faith in me."