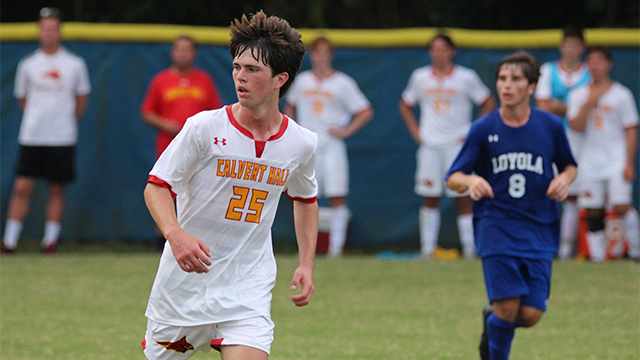 And just like that -- the boys Top 25 will have a new look next week as one of the nation's powerhouse leagues has decided to take the field.

The six Catholic school members of the Maryland Interscholastic Athletic Association A Conference broke ranks with the rest of the state last week and formed a one-year conference in order to play an abbreviated schedule between Oct. 31 and Dec. 9. The Dec. 9 championship date makes this league the latest-running fall season on record.

The league was formed after the MIAA, which formerly postponed high school sports, announced an "open fall season," which left the decision of playing to each school. In most cases, this would mean scrimmage-like contests among participants. There is almost no high school sports play anywhere else in Maryland this fall.

"We were not interested in playing a few friendlies," Curley coach Barry Stitz told Varsity Sports Network. "The kids are playing club ball at a championship level right now and we didn't want to just put our uniforms on and play meaningless games."

This 2020 Catholic League will roll back into the MIAA next year. While there are strong high school teams around the state, no conference matches the depth and quality of the MIAA, which is comprised of most of the state's elite club players. Case in point, last year's TopDrawerSoccer Maryland State Stars featured 19 NCAA Division I commits and signees. Twelve of them were from seven MIAA schools. Maryland had two players on the 24-player TopDrawerSoccer All-American team, both from MIAA programs.

Mount St. Joseph's 2020 lineup features a number of players from the Baltimore Celtic 03 team that won its US Youth Soccer National League bracket and advanced to the national championships in 2019. With multiple NCAA Division I commits, Mount St. Joseph is the Catholic League's preseason favorite and is certainly a team that could contend for a lofty FAB 50 ranking. Under usual circumstances, Archbishop Curley, Calvert Hall and Loyola also would have been under preseason FAB 50 consideration.

Missing from this private school power conference are McDonogh School, the defending MIAA champion, and perennial playoff performer Gilman. Neither are Catholic schools. McDonogh has announced that it will not participate in sports this fall.

NOTE: Instead of assigning a ranking number this season, teams will be grouped based on their results and talent pool. Once the season comes to an end and some reasonable assessments are possible, TDS will publish a final FAB 50.

Here are our TOP 5 teams in alphabetical order (with records as of Sunday, Oct. 18):

CHAMPIONSHIP WEEK: American Fork (Utah) and Davis (Utah) are each one win away from a second straight Class 6A girls state final clash of state powers. Last year American Fork edged Davis 1-0 for its second title in three years. Before that, Davis won three straight state titles. Utah's state semifinals are slated for Tuesday night with the championship scheduled for Friday night. ... Idaho will wrap up fall play this week with its state tournament series. Unlike most states, Idaho's entire state tournament plays out over three consecutive days - quarterfinals on Thursday, semifinals on Friday and championship matches on Saturday. Boise (Idaho) and Rocky Mountain (Idaho) -- league rivals -- are the heavy favorites for the girls large school title while Rocky Mountain (Idaho) and Eagle (Idaho) are the leading contenders in a more wide-open boys race. Boise girls are undefeated, handing Rocky Mountain its only loss. On the boys side, Rocky Mountain and Eagle are 1-1-1 in their three meetings this season.

SAY WHAT?: Connellsville (Pa.), a small school in western Pittsburgh, completed regular season play Monday with a 6-0 girls victory over Trinity. The result sealed a perfect 11-0 regular season finish for Connellsville, but more impressively the team has yet to allow a goal. The team moves into the 3A playoffs having outscored its opponents 102-0.