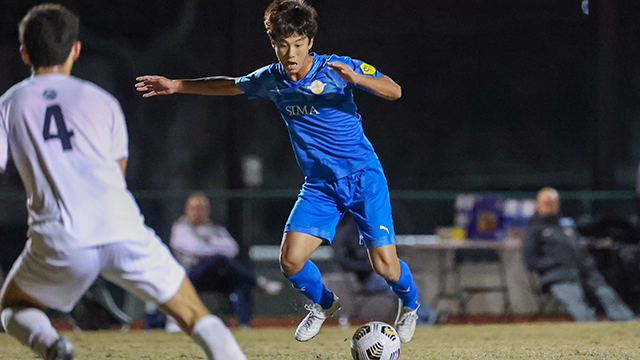 MONTVERDE, Fla. – This year’s iteration of the Montverde Academy Soccer Tournament looked a bit different than past seasons. Only eight teams participated in the 10th year of the showcase, with three of them being from Montverde.

“This year, we went with majority of Florida teams and ourselves because my number one concern and planning was the COVID situation.” SIMA Director Mike Potempa said.

The in-state teams are also some of the most competitive in the state, coming from MLS Next, UPSL and more.

“So this year, we actually have probably 40 to 50 college coaches and we also have three or four MLS first teams here watching and scouting. It’ll continue to grow and change but at the same time, the premise stays the same, which is an opportunity for the kids to play and compete and then get the exposure that they deserve.”

The only game of the day between non SIMA sides, the first of the day, went scoreless through 90 minutes, forcing a penalty shootout between Tampa Bay United and Leg A-Z. Goalkeeper William Clavier came up with two huge stops in the shootout to advance his team into the winners bracket.

SIMA Elite played a back and forth game against Florida Rush U-19’s in game two, with the Montverde side managing a 3-2 win. After going up 1-0 thanks to a bicycle kick by Adrian Adrian, the Rush conceded a breakaway after a touch in the back, which fullback Kaleb Alva took all the way to goal to tie the game up. SIMA broke the tie after Parker Smith was taken down in the box and Guilherme Rego chipped home the penalty. Adrian scored the equalizer minutes later with a give-and-go with Hector Aguilar, wrong-footing the keeper and finishing far post. Abdul Musah scored the eventual winner for SIMA, after intercepting a loose ball in the back, taking it from midfield, faking a shot and slotting it near-post for the win. The Rush almost had a spectacular equalizer late, when Adrian smashed home another bicycle kick from inside the box, which would have been his hat trick but goal was ruled just offside.

The third game of the day saw SIMA Varsity fall to a talented FC Florida Preparatory Academy 7-3. A hat trick from Dylan Talero and a brace from Xavier Csato led the way for the team from south Florida. After going down 2-0 in the first 15 minutes, SIMA Varsity battled back thanks to goals from Gui Wanderley and Hunder Outerbridge to tie the game at 2-2. Just before the first half ended, Faquir Raza for Florida Prep scored a tap-in to make it 3-2. Davi Cruz would score the next two for SIMA, but Florida Prep would score four more to win the match with ease.

Thursday’s finale match was a one-sided affair, with SIMA Gold winning handily, the final score ending up at 7-0. With Jacksonville FC having a shortened bench and SIMA being at full strength with some added newcomers to the side, the best Montverde had to offer came out the gates firing, peppering the goal in the first 10 minutes before Stephen Annor scored the first. From there, the dominance continued, as SIMA scored six goals before halftime, making a platoon swap at halftime. Mohamed Pouye would add a penalty in the second half, but Jacksonville would only get a handful of chances throughout the match as SIMA showed their strength throughout the 90 minutes.

M Ali Fadal, SIMA Gold: A powerhouse in the midfield, Fadal scored a beauty of a free kick early in the match that was inch perfect into the top corner and followed it up with a dynamic near–post strike just before halftime. Fadal is currently being scouted by pro clubs from MLS, Spain and Germany.

F Malang Mandiang, SIMA Gold: Rapid winger down the left, continuously beat his man off the dribble and put in dangerous balls into the box. Notched two assists and scored a goal for his efforts

F Dylan Talero, Florida Prep: A former Inter Miami CF academy product, Talero had a hat trick within 55 minutes of play, scoring two within the first 15 minutes of the match and the third within 10 minutes of the second half starting. A strong player with a decent left foot.

GK William Clavier, Leg A-Z: Held Tampa Bay United scoreless through 90 minutes and made two saves in the penalty shootout to win the match for his team.

D Shawn Smart, SIMA Gold: A Clemson commit, Smart played 65 minutes and was dominant on both sides of the ball. Very quick and composed on the ball, and able to track back quickly when getting forward. A very good modern day fullback.

M Haya Yoshizawa, SIMA Elite: Good composure with the ball and excellent vision downt the field. Helped set up a number of scoring chances and was strong on the ball in the midfield.

F Adrian Adrian, Florida Rush U19: An acrobatic forward, Adrian scored a bicycle kick goal to open the game and scored a second just before halftime. Put another bicycle kick into the back of the net late in the second half, but was ruled just offside.