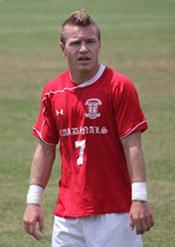 Millard led his team to a 20-6-2 record this past season and to the South Carolina AAA State Championship. He had two goals and an assist in the semifinal game, followed by a hat-trick in the final contest. Two of those hat-trick goals were in the final 1:59 of overtime to win the state title.

Millard was chosen as the 2012-13 Gatorade South Carolina Boys Soccer Player of the Year, and he will continue his playing career with University of South Carolina in the fall. He will play under head coach and NSCAA member, Mark Berson.

Lackey was the most influential player on the field during her team’s playoff run at the midfield position. She also assisted on the game-winning goal in the Alabama Class 1A-4A State championship game and finished the season as Randolph’s leading scorer in goals, assists and points.

Lackey was selected as MVP for the state tournament and was also chosen to play in the AHSAA All-Star Game in Montgomery, Ala., this summer.

The NSCAA/TopDrawerSoccer.com High School Player of the Week program is designed to highlight the future stars of the game. Anyone can nominate a player, however only players whose coach is a current NSCAA member are eligible for selection. Honorees will be announced on Wednesdays.

For more information on a NSCAA membership, visit NSCAA.com/membership. To see if your membership is current, login to myNSCAA.

The next submission deadline is Monday, May 27, followed by the May 29, announcement.