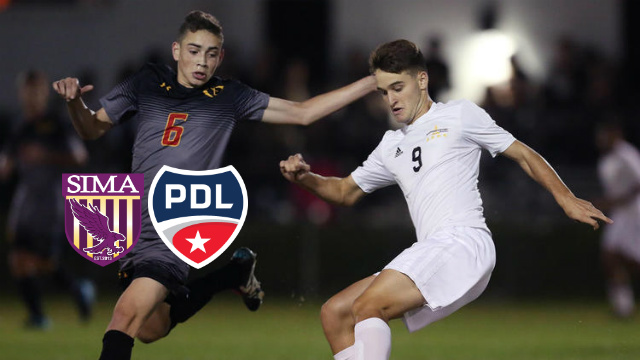 MONTVERDE, Fla. — After sending more than 50 players to NCAA Division I programs over the past six years, Soccer Institute at Montverde Academy (SIMA) director Mike Potempa noticed a reoccurring concern from those players.

"What can I do in the summer to keep progressing?"

Potempa now has an answer.

He confirmed Wednesday that SIMA will launch a PDL franchise, named SIMA Aguilas, which starts play in May.

"I see it as an opportunity to compete on a higher level in a league situation," said Potempa, who added that the SIMA team will focus on development and playing opportunities for 18-to-21-year-olds, although PDL allows players up to age 23. "This was a chance for us to continue to build our brand and raise the level. It started with the high school program, then we brought it into a higher level of youth development for 13-to-18-year-olds with SIMA. The next layer is the PDL side."

Although SIMA Aguilas will not be limited to former Montverde Academy student-athletes, Potempa said he expects most — if not all — of the rostered players will be Montverde alumni, giving the team the look-and-feel of a Montverde Academy all-star squad.

It will be another addition to the PDL's growing portfolio of clubs, and a boost to its Southeast presence.

"The PDL strives to be an elite developmental league in North America, and our mission completely aligns with Montverde Academy's aim to help young athletes flourish into better players and people," PDL director Todd Eason said in a statement. "SIMA is well known for producing talented individuals, and the addition of a PDL franchise serves as a platform for its players to learn, grow and receive national exposure on their path to the pros."

Potempa said he filled the roster with one text message.

"I sent one text message and 37 players told me they want to come back," he said with a laugh.

Potempa could not offer specific names since players still need to get league and, in many cases, college clearance, but he did summarize his expectations: "We have players at several of the top college programs in the country, so I feel it is safe to say we should have a pretty strong squad."

Potempa took over as Montverde Academy’s head coach for the 2010-11 high school season, and seven years later the program still has not lost a match. SIMA, which operates more like a club as opposed to a high school team, was created for a higher level of player development and year-round training and attracts both domestic and international players.

Potempa said he believes college-age players are under-served by such a limited competitive season and launching a PDL team fits into SIMA's overall player development model.

"Part of me finds issue with the fact that 18-to-22-year-olds in this country are in a competitive environment for 3 to 3 1/2 months a year and there’s nothing for them to develop during the other nine months. We are looking to fill that gap."

The SIMA Aguilas debut with a home match against The Villages SC on May 13. SIMA will play all of its home matches at Montverde Academy.