It’s been quite the summer for CASL’s Claire Wagner.

Fresh off helping her team capture the U16 ECNL National Title, Wagner is now preparing for next month’s ECNL/id2 International Tour, August 8-15, 2011 in London, England.

Wagner was named one of the 17 players that will represent the ECNL during a tour that will include games against top European Clubs, including Arsenal and Fulham, and training sessions at some of the top youth academies in the world. 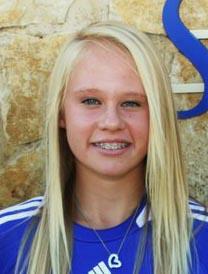 Megan McCullough
It’s a special honor for Wagner, but then, she’s had a lot of those lately. She was named to the U.S. U17 National Team Camp in April just two weeks before heading overseas to Germany, Holland and France with her 95 Region III ODP squad.

Amidst another collection of talented players, Wagner will once again infuse the team with her special skills.

“As a center back, I can bring the aspects of communication, organization, and the start of the attack,” Wagner said. “Playing in the center defensive position for the past six years, I have grown and developed qualities that I think can help any team I play for.

“Being named to this team is a really big bonus to the summer. When I received the invite I was more than happy and I can't wait to experience it.”

Wagner will be joined on the backline by Dallas Sting outside back Meagan McCullough, who will be making her first ever trip to play overseas.

“I am really looking forward to this trip,” McCullough said. “I hope to gain a lifetime experience playing in another country and hope to learn more in soccer that will improve my play.”

McCullough should also improve her teammates with her knack for playing combinations and getting the ball forward.

One attacker who would love to be the recipient of one of McCullough’s passes is Summer Green, one of many talented offensive players in a group that also includes Morgan Andrews, Jaclyn DiMartino and Gabrielle Miranda.

“I try to bring energy and excitement to the game,” Green said. “I also try to bring the attacking half into the game as much as possible. I’m looking forward to doing that in London.”