The Rock Stars of U.S. Soccer 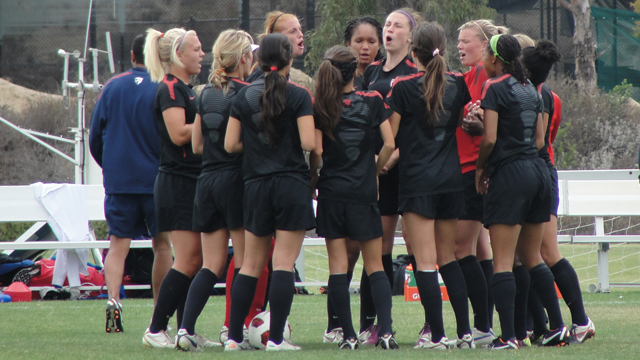 CHULA VISTA, California – There is nothing quite like covering a U.S. U17 Women’s National Team camp. 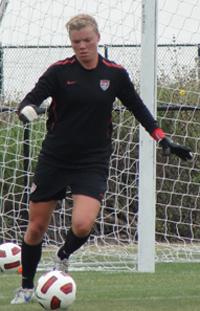 The sidelines are a mixture of passionate parents and other family members, and equally as enthusiastic fans.

Yes, there are fans, very knowledgeable fans, in fact, for the U17 WNT.

The young players who surround the sidelines imitating their favorite players only heighten the spectacle. With squeals and shouts, as their idols run by, the sideline antics are a show in itself.

With a couple of hundred fans looking on during Saturday’s scrimmages, a modest crowd by this team’s standard, it was the normal spectacle both on and off the field – quite literally.

During one half time break, a pair of fans ran across the field to seek out head coach Albertin Montoya and ask for a photo and autograph. The former WPS coach graciously granted the request then told them that he needed to get back to work.

There is no ‘big timing’ from this group, after all the players are all just teenagers themselves.

From Summer Green and Miranda Freeman’s coordinated handshakes to Morgan Andrews’ primal pregame cheers, they are just having fun in the spotlight and humbled that someone would want an autograph or a photo with them.

Along with the CONCACAF Championship trophy has come more attention and fans, even goalkeeper coach Rob Becerra is getting in on the attention. Becerra had his hands full with autograph-seekers on Saturday.

The fans traversed from close and far to the camp near the California Mexico border in hopes of imparting something on their children but also in the faint dream that they were watching the future of U.S. Soccer.

“This is the Olympic team in eight years,” one mother remarked to her young daughter as the U17 WNT took the field.

Perhaps, but that is long way off.

And this group is mostly concerned about tomorrow – the next obstacle in the way for Montoya’s group in its quest to win the 2012 U17 Women’s World Cup.

The week-long camp, the initial get together since the CONCACAF Championship, that wrapped up on Sunday was the first of three U.S. Soccer has planned before September when this team heads to Azerbaijan to try and capture the first World Cup title for this age group.

Even though the off the field charades were exciting, the results on the field during this camp were not entirely flattering for the U17 team that is so accustomed to victory. The camp started with a 2-0 defeat to the U.S. U18 Women’s National Team on Sunday the 10th.

“That was a bit of a difficult game for us because half of the team got in late that night and we were up at 6 in the morning to play a team that was at the end of its camp,” Montoya said. “I also mixed it up. I had a backline in the second half, that is when they scored both of their goals, that had never played together before.”

Montoya added that he did not put much into the result considering the circumstances, but he did notice one area for improvement with this group, as he emphasized on taking care of possession especially when building out of the back.

On Saturday, the costly turnovers from the defense cost the U.S. again in a 2-0 loss to Surf.

“We still have a couple of more camps to work on it,” Montoya concluded.

With the fight for a roster spot on this heralded squad so fiercely competitive, it comes down to just those instances during these camps that could mean a trip to Azerbaijan or a long autumn ruing the missed opportunity.

Players like Claire Wagner, Arielle Ship, and Gabrielle Matulich, who did not make the CONCACAF Championship roster, did well during the camp in Chula Vista, but still find themselves in a difficult position for a potential place on the World Cup roster with very talented players ahead of them.

Montoya relishes the competitiveness that the roster battle brings, as he wants to challenge this team to be as complete as possible before the meaningful games start in late September.

“I’m excited about where we are at right now,” Montoya said with a hint that he knows this team still has a lot of room to grow.

“I think this camp was the best soccer we have played out of any of the camps,” Montoya said. “To make it a more entertaining game, it really takes a few training camps. I really tried to put them in more pressure situations this week to make them play faster.”

The coach plans to continue to work on the speed of play with the group over the next two camps especially with movement off the ball and connecting passes from the defense to the attack.

He will get that chance to work with them again in July when the group heads to France for its second camp. The team will wrap up domestic preparations for the World Cup with a camp at the Home Depot Center in August.

Months of toiling away on empty fields are ahead for many players on this team, but when they get together – the crowd will follow.