What do we think of Mexico's youth success? 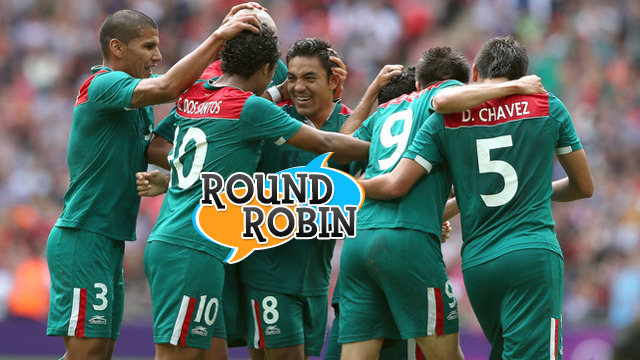 While there is plenty to be excited about with the success of the U.S. women's national team at the London Olympics, it still shouldn't be too far from the back of the mind of soccer fans the dismal failure of the men's national team to make it to the competition.

And even though moving on from that disappointment is the healthy and normal thing, Mexico doesn't allow for that to happen. El Tri clinched a spot in the Gold Medal game where they'll face Brazil. It is just another in a long line of recent success for Mexico's youth soccer programs, as our neighbors to the south have dominated youth competitions at the international level spanning from CONCACAF to FIFA youth World Cups.

Given those triumphs -- like winning last summer's U20 men's World Cup -- should we care about Mexico's recent dominance at the youth level? Should we be concerned by it?

Travis Clark: Of course we should care. Disregarding the success of Mexico would be foolhardy, and the gap between the senior men's national teams continues to get bigger and bigger as some of these youth players earn promotion to the full team.

However, it's not the end of the world by any stretch of the imagination, as success at youth levels are by no means guarantee of success at the full team -- see various African nations that have won youth World Cups.

What is concerning, of course, is the emphasis Mexico is placing on youth development, including the implementation of a U20 professional league of sorts (within the Mexican top flight) that offers competitive matches to players at that age group. If anything, Mexican success should continue to magnify U.S. Soccer's youth development shortcomings, and used as an agent for change.

Caroline Yort:  It seems to me that if the soccer world was as it should be, youth players from Mexico would flock HERE for development, not the other way around.

The facilities here are better (though it depends on how you define better), and we are trying to have a coaching system that can develop players for the international level.

But we are clearly not there yet.  As long as we have any semblance of a pay-to-play system in this country, we will have a hard time catching up to the soccer-forward nations. Youth soccer in this country is expensive, and families have to gauge their child's potential vs. their ability to pay for the program, even as young as U10.

Mexico certainly doesn't have that issue (and neither do European countries), as professional teams fund the youth programs, even at the youngest age groups, and players are invited into the system.

On a positive note, U.S. Soccer's push to have Development Academies be fully funded is a huge step in the right direction, as is the push for MLS involvement.  We still have a pretty long way to go, but we can get there.

Robert Ziegler: I think there’s a both/and aspect to this. I’ve been preaching for years that the youth world cups aren’t as much of an important factor in gauging our youth development prowess as some people think, however having players who are capable of doing well at these events can be an indication of how good well the whole development process is actually going.

The Mexican professional clubs are the ones who are doing the developing of these players. The fruit of their work is a youth national team system that is superbly competitive at the highest levels.

The lack of such development at our pro clubs has forced our national team system to provide the prime venue for youth player development (Bradenton) and despite the many good people and good intentions involved, the model is always going to be limited when it comes to holistic player development.

The powers that be on the soccer side in USSF recognize that, and the Development Academy is getting better every year.

Hopefully the organization will end the residency program after this cycle, continue to support and strengthen the Academy (and hopefully the professional clubs will continue accelerating true youth development models within), and then we’ll be consistently producing the type of youth internationals who can actually compete at the highest level, including the FIFA events.

Travis Clark’s Final Word: We’ll have to wait and see how the recent success for Mexico at the youth level translates to the full team. If anything, it should be a constant reminder that the youth system here always needs to be improved and more importantly, led by the pro teams here in the States.