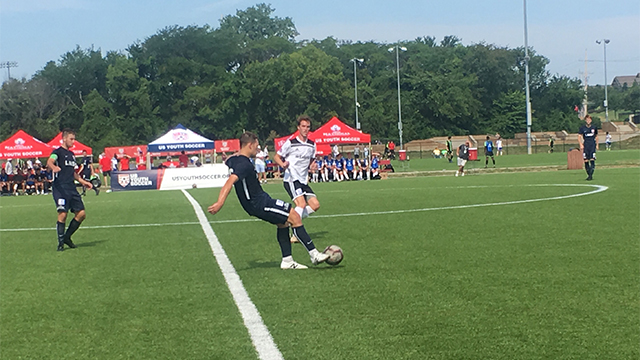 OVERLAND PARK, Kan. -- Following a day off on Friday for most players and teams, action returned Saturday morning with the semifinals of the U.S. Youth Soccer National Championships.

TopDrawerSoccer was on hand for four matches from the semifinal round, which included games from the following groups: U18 Girls, U15 Girls, U16 Boys, and U19 Boys.

From the U18 girls division, goals from Nia Christopher and Madison Greenberg were enough to take Premier Navy 2001 into the final after beating Celtic FC Premier JR 2-0. The Baltimore, Maryland side will play 01 Lady Lobos Rush Premier of Tennessee on Sunday morning.

From the U16 Boys, Las Vegas Soccer Association 03 Silver defeated Syracuse Developmental Academy after going all the way to penalties. LVSA move on to face Beadling 2003- South Red on Sunday morning. LVSA defeated Beadling on matchday one 3-0.