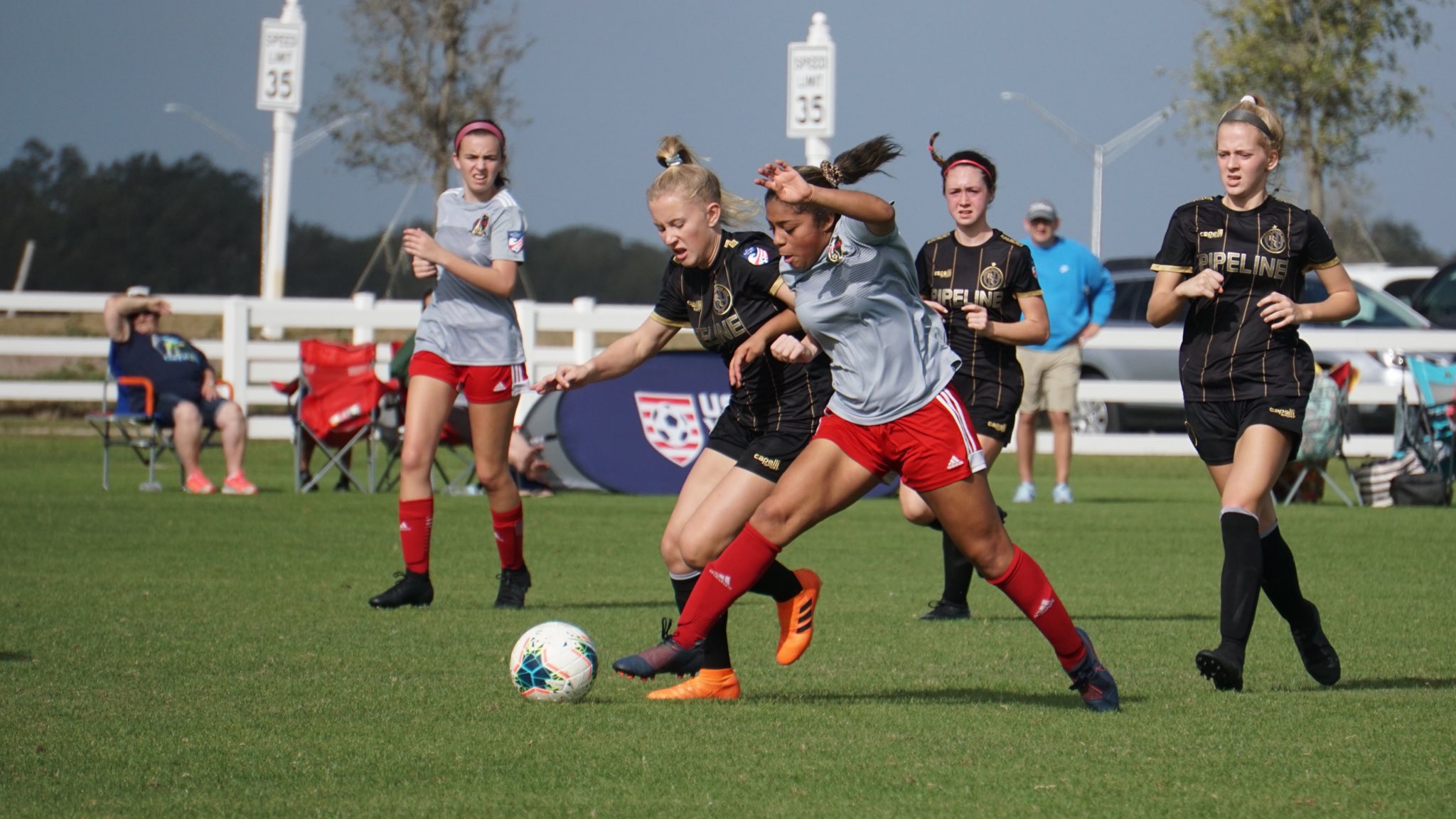 The 2019-20 US Youth Soccer National League season continued on Saturday, as half of the girls teams in the 15U through 19U age groups competed in their second game at the Premier Sports Campus in Lakewood Ranch, Fla. In addition to the National League matches, 24 US Youth Soccer Conference teams are competing in showcase games at the event.

“It’s incredibly humbling. Coming back here again, there are so many great teams in the National League,” SC Wave 04 captain Savannah Sievert said. “It’s giving us an opportunity to better ourselves and better our play as a team. Nationals was an amazing experience last year, so getting to go back will be a blast. And we’re obviously hoping to defend our title again.”

"This is our fourth year in the National League. We want to come in each year with the goal to improve upon our finish,” Beadling 02 coach Jodi Chmielewski said. “We came into this year with the goal of winning the division and getting that National Championship bid. I’m super proud of these girls. With these older age groups it’s such a cool memory to have, especially for the girls that are playing their last year."

While two titles are wrapped up, several teams still have chances to clinch top spots on the final day in Florida after many close results on Saturday prevented possible division titles.

The National League Girls teams that do not compete in Florida will continue their season at the Players College Showcase in Las Vegas — with games played March 20-22.

The National League features the top 346 US Youth Soccer teams in the 14U through 19U Boys and Girls age groups, and it provides an avenue for teams to play in meaningful matches against top competition from across the country for continued development. In addition to recruiting opportunities, the top finishers from each division will earn a ticket to the 2020 US Youth Soccer National Championships, making each match valuable to the teams’ fate as it could make or break their chance at competing for the National Championship.

The teams competing in Lakewood Ranch will wrap up the weekend with games on Sunday. Complete standings, scores and schedules, including goal scorers and match information, can be found at the results page here. Click on the score of each game for more information.

Some highlights from Saturday’s matches…

Pipeline SC Pre Academy (MD) had an exciting match up against Madison 56’ers Red (WI), as Pipeline looked to move up in the standings with some help from other teams in the 15U Blue Division. Pipeline got off to a quick start when Sydney Feiler capitalized off of a penalty kick to put her side up 1-0 in the 6th minute. The 56’ers were able to tie it up in the second half when Mairin Duffy hit the back of the net off a penalty kick. Pipeline came right back and took the lead when Payton Schenning took a cross from the left side and put the ball past the keeper in the 61st minute. Linsey Trapino was able to tie up the game for Madison when she found the back of the net in the 78th minute — forcing a 2-2 tie.

A 2-0 win against Pipeline SC Pre-Academy (MD) helped CFC Redstar (GA) maintain its lead atop the 16U Blue Division standings. After a scoreless first half, Dylan Driver put CFC in front when she intercepted a pass deep in the attacking half and shit a shot off the charging keeper and into the net. Evelyn Hammer netted a second goal for the Georgia side in the 63rd minute, and defense recorded its second shutout of the season to help CFC to its fifth win. Redstar will face fellow Saturday winner Sporting St. Louis Red Devils 2004 (MO) on Sunday in a match with serious division title implications.

SC Wave 04 Girls Blue Juniors (WI) clinched the 16U White Division title on Saturday, as it pulled away from NCFC 04 Elite (NC) for a sixth straight win in league play. Kayla Budish put SC Wave in front in the 37th minute, as she received a through ball and slipped a shot around the keeper. NCFC equalized early in the second half when Shae Wells found the back of the net. Elena Zuchowski put the Wisconsin side back in front when she curled a left-footed shot into the right side netting. Budish added her second when she converted a penalty kick inside the left post to give SC Wave some breathing room. Zoe Hevey, Felicity Deboer and Budish added goals later in the half to cap the big win and give SC Wave the win it needed to secure the division title.

PSA National 03 (NJ) applied pressure from the opening whistle in a 3-1 win against SC Wave Juniors 03 (WI) on Saturday in 17U Blue Division action. After some early PSA chances, Emily Jozak put the New Jersey side in front in the 31st minute when she got in behind the defense and beat the keeper. Fiona Sargent doubled the PSA lead shortly before halftime with a goal off of a corner kick. Tatum Adamson pulled a goal back for SC Wave in 64th minute, but PSA immediately replied with a Samantha Moxie tally to regain its two-goal advantage. The New Jersey side held on for the 3-1 win to move into sole possession of first place in the division.

Keystone FC Premier 03 (PA-E) moved to the top of the 17U Red Division with a strong defensive effort and shutout 4-0 win over AFC Lightning 03 (GA). Carly Fairchild gave Keystone an early lead in the 11th minute when she put one in from inside the penalty box. There were no other goals in the first half, but Keystone was able to score three unanswered goals in the second half to put the game out of reach.

Cleveland FC 02 (OH-N) was able to hold on to first place in the 18U Black Division with a 3-2 win over Team Boca 2002 (FL). The first half saw one goal from each side, as Kathryn Ramicone scored for Cleveland and Jada Fernandes scored for Team Boca. Cleveland struck first in the second half when Sophia Gorski found the back of the net in the 72nd minute, but Madison Micioni responded right back for Team Boca with a goal of her own in the 81st minute. Cleveland got the winning goal on a through ball to Haley Anspach, and she was able to find the corner of the net past the keeper. Cleveland will play Legends FC Black (MI) on Sunday in a winner-take-all match up for the division.

Beadling 02 Showcase (PA-W) clinched the 18U Red Division with a close win over NJ Stallions Maximus Red 2002 NL (NJ). Beadling wasted no time as Olivia Yoder was able to find the back of the net in the 2nd minute. NJ Stallions responded in the 24th minute when Jana Mucci scored. Beadling was able to take the lead and hold it with a goal by Ellie Coffield in the 54th minute. Beadling has won all six matches so far this season.

Nationals Union 01 Black (MI) put 1776 United FC 01 Xtreme (PA-E)’s title chances on hold with a decisive win in the 19U Blue Division. Arianna Jalics converted a 35th-minute penalty kick to put Nationals in front, and the Michigan side scored shortly after to double the lead. Nationals applied immediate pressure at the start of the second half, and they eventually turned it into three consecutive Meike Ingles goals to take a commanding lead. Sophia Muetterties pulled a goal back for 1776 United, but Nationals held on for the win. Nationals remains in second place — two points behind 1776 United at the top of the standings — with one game left in Florida.