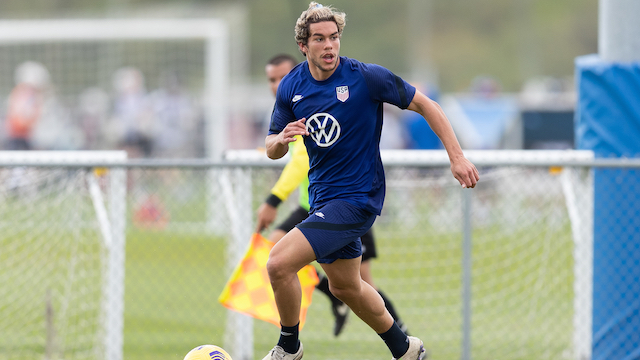 The new year brings a new chance for the U.S. Soccer Youth National Teams to return to international competition - assuming they can still happen safely as planned. This past year, 2021, had the U.S. U20 Men’s Team hit the field with three games in Mexico. The results were not encouraging for the lone international trip of the year with three losses from three games for the new coach- albeit under some challenging circumstances with only one training with the full team and a coach hired only days before the team left the country for the event.

The change in the calendar always brings renewed optimism. This year, 2022, could be a busy one for the youth national teams, if international travel and regional competitions are still permitted. With the promise of potential leading the way, there is plenty of reason to be excited this year. The four key teams (U17 MNT, U17 WNT, U20 WNT, U20 MNT) all have new coaches - two of whom were promoted within the U.S. Soccer program, the other two are new to the role. The women’s youth teams could both be in a World Cup during this calendar year. The Men’s youth events were pushed to 2023, but qualifying for the U20 event is still in the plans for this summer.

With the possibility for a busy year ahead, here is a look at one noteworthy aspect from each of the four key YNT teams for 2022.

Tracey Kevins was named as the head coach of the U20 squad late in 2021. She is familiar with the player pool following her work at the U17 level - and has already seen nearly 50 players in person thanks to two camps prior to the end of last year. The U20 team has a lot of promise with a number of players from the top youth players in 2021 eligible for the squad.

The most fascinating aspect for this team is the roster construction. Portland Thorns midfielder Olivia Moultrie, the lone professional in the player pool right now, was the only player to appear in both camps in 2021. Will Kevins build the team around her? How will the coaching staff balance a roster with a number of college players along with some players from the club game who deserve a spot?

The key for this team is hitting the ground running with a clear identity to how they want to play with less than two months before the start of the regional championship.

Following the learning experience in 2021 at the tournament in Mexico, there is plenty of room for improvement for this squad in 2022. New head coach Mikey Varas appeared on a show in November stating that he would have three camps with this group prior to the Concacaf Championship in the summer.

Being efficient with his camps will be key for this group in 2022, which will put a high priority on Vargas and his staff in scouting, recruiting, and getting clubs to release players for the camp.

The Dominican Republic is also hosting the Concacaf U17 Championship in 2022. The event for the U17 event is scheduled to kick off on April 23. USA was put in a group with Grenada, Puerto Rica, and Costa Rica.

New head coach Natalia Astrain had her first camp with the group in November, which included 28 players. Following the extended period without youth national team camps in 2020 and most of 2021, the key of this team should be expanding the player pool.

U.S. Soccer’s scouting efforts for the women’s teams have been robust with scouts at the major club events at every level in the past year. This legwork will pay dividends for future teams as the player pools develop and grow. This U17 group should be the first to experience that concentrated effort as there are plenty of talented players in the 2005, 2006, and 2007 age groups worth consideration for this team.

The timeline has changed in the youth game for the men’s side. The U17 age group is already put under the pressure of figuring out the club situation for the elite talent at an early age. The MLS Next event in Southern California in December showcased how early players are being identified for opportunities and how quickly the path to the professional payday is laid out in front of the player. The opening day of the event featured the U15 age group (2007s) and the sidelines were packed with agents from event agency in the country, plus scouts from Europe as well.