Only college player in Champions Final 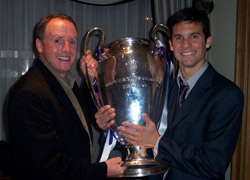 This month marked the end of the 57th UEFA Champions League. Millions of people watched as the victors of the 2011-2012 Champions League Finals were determined by a penalty shootout. In the end, Chelsea beat out Bayern in order to clinch a victory and earn their place in history, but 10 years ago it was a former college player who helped make history as he stood at the top of the soccer world. That player is Santiago Solari, and this year marks the 10-year anniversary of the moment that he played in the 2001-2002 UEFA Champions League finals against Bayern Munich. 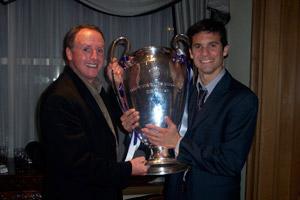 In 1994, Solari’s father and uncle, who were both Argentinean coaches for the Saudi World Cup Team that year, came to Stockton, New Jersey. There they trained with their team at Richard Stockton College of New Jersey where they met and worked with Tim Lenahan, the current Head Coach of men’s soccer at Northwestern University and the former Head Coach of men’s soccer at Richard Stockton College of New Jersey. Lenahan travelled with them as they competed after leaving Stockton, and during this time Lenahan developed a close and lasting relationship with Santiago’s father, his mother and with Santiago himself. Solari is a retired Argentinean professional soccer player who is still very active within the soccer community. He currently writes a blog "El Charco" about soccer for Madridpaper El Pais and has appeared on ESPN Deportes as a commentator. Solari comes from a family that has been invested and involved in professional soccer for a lifetime and he has even discussed the potential future of his child as a soccer player in an interview (link provided below).

It was eventually decided by Santiago and his father that since Santiago had completed high school but was not yet 18, it would be a good experience for him to come to the United States to study for a semester, learn English, and train before turning pro. While in the United States, Santiago attended Richard Stockton College of New Jersey where he played for Lenahan who helped him to train and develop as a collegiate athlete. During his freshman season with Stockton, Solari was able to earn 8 goals and make 15 assists and he was named as the NJAC Rookie of the Year.

Since leaving Stockton, Solari has completed his college degree in Argentina and just recently completed his UEFA Professional Coaching License, a course that was limited to players with a minimum of 10 years playing in the first division of top leagues in Europe.

What is significant and remarkable about Santiago Solari is that he has one of the most distinguished professional careers of any former collegiate player. Solari remains the only college player ever to play in and win a Champions League Final. No other college player has come close to reaching this achievement.

Solari’s role in the 2001-2002 UEFA Champions League Finals is one of his greatest accomplishments in soccer and it is what makes him a remarkable player, particularly given the recent UEFA Championship. In the 2001-2002 championship game, Solari played as a left midfielder and he remained in play for the full 90 minutes, toughing it out through the entire game from beginning to end. Solari also played a part in the winning goal of the game, assisting in the play that led to Zinedine Zidane’s wonder strike against Bayer Leverkusen, which is considered to be the greatest goal in Champions League history and which won the championship game for Real Madrid.

As a player, Solari has been quite successful, particularly given that he was a collegiate athlete. Given the recent UEFA Champions League Finals, Santiago’s success resonates with members of the soccer community at the moment, particularly with Tim Lenahan, who has remained a close friend of Solari’s. Lenahan was Solari’s sole guest at the championship game when Real Madrid won the 2001-2002 Champions League, attending the championship dinner afterwards and actually hoisting the cup with his former player.

In discussing Solari, Lenahan states that “what is great for me is the friendship that [we] developed after he left Stockton. I was very honored to be his guest at the dinner but we remain in contact even after he has retired.”

For those who want to know more about Santiago Solari, the following link is a video of Tim Lenahan interviewing Solari in 2010 after watching the World Cup Finals. Lenahan has Solari talk about playing for Vincente DelBosque, the Galacticos, playing at Stockton, and whether or not he would send his son to play in college. The video is just over nine minutes long and it contains some amazing clips and photos in addition to the interview.

Watch the interview between Lenahan and Solari HERE.

Tim Lenahan is currently the Head Coach of Men’s soccer at Northwestern and has been named Coach of the Year numerous times (1990, 1993, 1996, 1998, 2000, 2011). Lenahan has achieved two Elite Eights and a Big 10 championships in 2001. Northwestern will be holding men’s soccer training camps, led by Lenahan, during the coming months of June and July. For more information regarding the Northwestern University men’s soccer camps, please go to www.nusoccercamps.com.