Here is the Players To Watch Team of the Month in July for the Northeast Region (Maine, Vermont, New Hampshire, Rhode Island, Connecticut, Massachusetts).

Remember, this feature is to honor top performers in their region over the past month or so and across the span of age groups. There will be a boys' list and a girls' list, and a new region will be
covered every weekday, Tuesday through Friday of each month. You can submit nominations at teamofthemonth@topdrawersoccer.com .

Following is the Girls List, in no particular order:

Morgan Andrews, FC Stars of Massachusetts (MA), U18, Midfielder: Morgan Andrews scored in 3 out of 5 games in the U18 FC Stars of Massachusetts run to the U.S. Youth Soccer Region 1 championship. Later that same week, Morgan scored for the U23 Aztec team in their 3-0 victory, helping them with their current first place ranking in the Northeast division of the WPSL league. This month, Morgan will be playing for two U18 national championships (ECNL & USYS), as well as being named to the PUMA Women’s Elite Showcase, to be held in July.

Hayley Brock, FC Stars of Massachusetts (MA), U18, Forward: Hayley Brock returned from her first collegiate year of soccer to lead her team in scoring, with 4 goals in the USYS Region 1 championship. A skilled and speedy forward, Hayley will be playing in the U18 U.S. Youth Soccer National Championship in Arizona before heading off to play in college at the University of Maryland, where she has transferred. 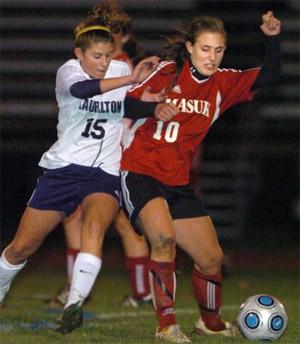 Alyssa Fratarcangeli (left)
Chelsea Roche, FC Stars of Massachusetts (MA), U18, Defender: Chelsea Roche scored two goals, for the U18 FC Stars of Massachusetts, in the first game of the USYS Region 1 Championship. A strong and skillful defender, Chelsea played almost every minute of the series, helping her team to their second (previously as U14's) Region 1 Championship .Chelsea will be playing for the U18 ECNL and U18 USYS National Championships, this month before heading off to play collegiate soccer at Colgate University.

Andrea Gilmore, New England Futbol Club Dynamite (MA), U13, Forward: Andrea, a talented high scoring forward with great speed and technical ability, capped off a great season by being named to the ODP Region I pool for the second year and along with her team’s Massachusetts State Cup win she was honored with the MVP award following the State Cup championship finals.

Rachel Bloznalis, New England Futbol Club Elite (MA), U16, Defender: NEFC Elite’s rising U17 central defender, Rachel, was recently named to the Region I 95’s player pool. One of the team’s captains, Rachel is a strong and vocal leader in the back who organizes the defense for her team who had a strong season in the Region I Premier League finish third scoring the most goals of all the teams in their group.

Beth Kamphaus, New England Futbol Club (MA), U14, Forward: Beth, a technical striker who can play the ball and shoot off of both feet proved she is also an unselfish distributor of the ball leading her team in assists this season while providing the second most goals for her team. Beth is described as an all around excellent player and athlete.

Victoria Carter, Bayside FC Bolts (RI), U15, Forward: Victoria led all scorers with five goals in the first three days at the Region I Championships and at the end of the weekend, she held on to second highest goal scorer in the U15 group. Victoria is a natural goal scorer. She excels in 1v1 situations and can score off both feet from distance and from short range.

Fallon Greene, Bayside FC Bolts (RI), U15, Defender: Fallon leads the Bayside defense from the center back position. She is a strong and vocal leader who directs a flat four defense with technical precision. Fallon and the efforts of Bayside’s defensive unit were key to the team advancing to the semi-finals at the Region I event.

Sarah Lavigne, Bayside FC Bolts (RI), U15, Central Midfielder: Sarah is a 98 playing up with the U15 Bayside Bolts FC. She is the team’s holding center midfielder, shows well beyond her years with her ball skills, ball retention, passing accuracy and soccer IQ. Sarah was recently selected to the 2012 Region I ODP Pool for 1998 Girls at the ODP ID Camp at the University of Rhode Island.

Allison Walton, Scorpions SC (MA)/Brunswick High School (ME), U18, Defender: Ali finished her youth soccer career this season with more honors to add to her collection including being named an NSCAA All-American, a two time NSCAA Adidas All-Region selection, and her second Gatorade Player of the Year for Maine among others. Walton, will be continuing her scholastic and soccer career at Providence College this fall.

Kate Makaroff, Scorpions SC (MA), U18, Center Midfielder: One of the Scorpion’s captains provided her squad with superior passing ability, a tireless work rate in the middle of the field, and the ability to start the attack from the back. Kate finishes out her club career having been led her team to Region 1 championships in 2006 and 2008, and Massachusetts state champions in 2006, 2008 and 2009. Kate will be continuing her scholastic and soccer career at Harvard University.

Samantha Mewis, Scorpions SC (MA), U18, Midfielder: Samantha Mewis ends her highly celebrated career with the Scorpions SC to continue her soccer and scholastic career in the sunshine of southern California at UCLA. Samantha, voted as the National Soccer Coaches Association of America’s National High School Player of the Year, has also made eight international appearances as part of the Under-17 and Under-20 U.S. national teams.

Jenna Bike, Connecticut Football Club Arsenal (CT), U13, Forward: Jenna is drives the offensive effort for the U13 CFC Arsenal. Considered one of the top offensive players in her age group in the state, Jenna is a very technically skilled forward displaying speed and creativity with and without the ball.

Alyssa Fratarcangeli, Connecticut Football Club United (CT), U16, Center Midfielder: Alyssa brought her impressive range of skill from the CFC U16 United squad to the Women’s Professional Soccer League this summer. She impressed at the center midfield position showing her technique, vision and work ethic during her time with the WPSL Passion.

Samantha Grasso, Connecticut Football Club United ECNL (CT), U15, Forward/Midfielder: Samantha, a Region I Girls ODP Program 1996 Regional Pool member, is a versatile athlete that can score from the midfield or forward positions. She is a very technical player with lightning-fast speed with or without the ball.

Jared Barroso, Bayside FC Bolts (RI), U13, Forward/Midfielder: Jared was the leading scorer – five goals including a hat-trick - at the end of the group stage for the U13’s at the Region I event. Jared is a versatile and extremely fast and creative goal scorer with a great soccer IQ and great field vision.

Alex Dorego, Bayside FC Bolts (RI), U13, Midfielder/Defender: Alex is a versatile athlete who can play in the middle of the pitch as well as in the back. He is ‘an engine’ with great endurance, excellent passing skills out of the back, a strong ball winner and a set piece specialist who has scored several goals – including a key one at Region I – off headers. 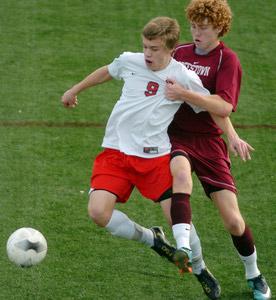 Gabriel Mawolo, New England Futbol Club (MA), U14, Forward: Gabriel is a member of the Region 1 ODP team and on their recent trip to Italy he scored 10 goals. He will go to Europe shortly for trials at several academies.

Izaiah Jennings, New England Futbol Club (MA), U14, Midfielder: Izaiah is only 12 years old and has been playing up 2 yrs in age. Izaiah is a regular starter and scored a great goal in this season’s State Cup semi-final.

Abdul "Said" Haji, NH Classics, U14 (NH), Midfielder: Attacking midfielder “Said” is a very technical, smart player who sees ahead in the game, is fast and athletic and able to create. This season, Said led the team in scoring as a U13 playing up one year. Said scored three goals in the Bayside Bolts (RI) Father's Day tournament to lead the team to tournament champions. Emigrated from Somalia, he is attending the Region 1 ODP callback camp this week.

Amar Dzelilovic, NH Classics, U14 (NH), Midfielder: Amar is a very technical athlete with speed, works on both sides of the ball and is very strong in the air. A utility type player who is comfortable anywhere on the field, he can dominate in the back or the midfield. Amar controlled the midfield in the Bayside Bolts (RI) Father's Day tournament to lead the team to tournament champions.

Chris Paradis, NH Classics, U14 (NH), Defender: Chris is a big, fast, physical, left footed defender. Best as an outside left back or left flank he is a big engine and can get up and down the pitch with great pace from the start to finish of a game. Chris had three assists in the Bayside Bolts (RI) Father's Day tournament to lead the team to tournament champions.

Riley Ellis, NH Classics (NH), U16, Midfielder: Riley is a technical, intelligent player with great field vision, covers a lot of ground, works on both sides of the ball and is strong in the air. Riley plays best as a holding midfielder and possesses excellent ball distribution skills. Riley helped to lead his team to the Region 1 final four at Lancaster, PA.

Erik Martel, NH Classics (NH), U16, Midfielder: Attacking midfielder Erik is a speedy creative player who is dangerous on the dribble and excels at combination-type play. Erik has played for a few years with the Region 1 ODP team and he will be transferring to the New England Revolution Academy team this coming season.

Mitchell Marchand, NH Classics (NH), U16, Midfielder: Mitchell is a big, strong, physical player who can cover the back or play as a holding midfielder. Mitchell is very strong in the air who threatens to score on every service into the box. He is hard working, very reliable and helped to lead his team to the Region 1 final four at Lancaster, PA.

Evan Powlowsky, NH Classics (NH), U17, Defender: Evan possesses good technical ability and ability to read the game. He is a consistent defender with good speed and deceptive strength. Evan helped lead the defense and his team to their fourth straight New Hampshire State Cup.

Andrew Pesci, NH Classics (NH), U17, Goalkeeper: Andrew is a very reliable, athletic goalkeeper. He is a good shot blocker, works hard in practice and in games and always plays with great courage. Andrew helped lead his team to their fourth straight state cup.

Enzo Salvatico, NH Classics (NH), U17, Forward: Enzo is a creative, technical player who is “tricky” on the dribble. Enzo plays with quickness and intelligence and can see ahead in the game and possesses good shooting accuracy. Enzo helped his team’s offensive effort to their fourth straight state cup.