Comments
For this week’s edition of Players To Watch, we went down to Florida to pick out the best players in the state. But because there were so many great players to choose from, we had to leave some very good ones off this list.

So rest assured, whoever made this list has a very, very bright future. Here are some of Florida’s top 2013 Girls:

Jackie Stengel of Space Coast United is a game-changing forward with the ability to take over a game. She’s a special player with good one-on-one skills who can score with either foot, and her intensity and ball-skills are unmatched in the age group.

Eva Banton is a dominant center back with great physical tools and one-on-one defensive skills. She has great energy and focus and her off-field preparation is second to none. 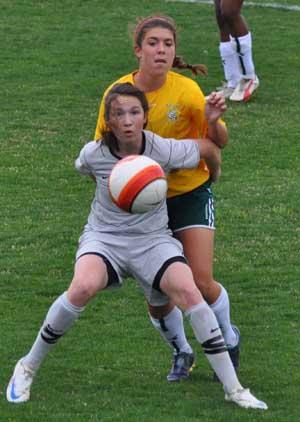 Renegades FC (front)
Taylor Calhoun is a central midfielder who doesn’t get noticed much because of her simple style, but she’s makes the attack go. She’s consistent and her fitness is always high, she’s an accurate distributor and performs consistently no matter the situation.

Donish Cole of Renegades SC is a dynamic winger who is extremely dangerous on the ball. She’s a great one-on-one player with a strong shot and the ability to break down a defense seemingly at will.

Camille Jackson of Creek Clash is an attacking central midfielder with excellent ball skills, endurance and speed to burn. She’s a smart player who can pass or take defenders on one-on-one.

Mary Ellen Crist is a creative attacking midfielder who can make incisive passes with either foot. She’s not the fastest player on the field, but is a good distributor with great ability in the air for a player her size.

Mary Sturgis is a holding midfielder with great strength and the ability to strike a ball accurately over distance. She’s a free-kick specialist with a great understanding of the game.

Mallory Bane is a tricky central midfielder with great pace and ball-skills. She can run all day, strike the ball all over the field and is a threat every time she touches the ball.

Brooke Sharp of Ponta Vedra SC is a forward with great strength and speed and a classic striker’s mindset. She’s very dangerous in space and can burst through a defense to score at a moment’s notice.

Taylor Valentine is an attacking midfielder with great size, speed and technical skill. She projects as a holding midfielder in college because of her ball-winning and distribution skills.

Natalie Torres of Clay County SC is a brainy central midfielder with great playmaking skills and an uncanny game-awareness. She has great vision and slides the right balls through with either foot; she’s mature player who understands the rhythm of the game.

Janice Quick is Torres’ opposite – a super fast and athletic player who has good technique but would do well to occasionally slow her game down. Still, she’s a big threat going forward.

Elyse Fontecchio of HC United is a strong left footed target forward with a great strike of the ball. She has excellent technique for her size and holds the ball up well. She has great vision and is dangerous shooting on goal from 25-30 yards out.

Marley Opilla is a technical winger with a great left foot. She’s smooth and composed on the ball, is a good athlete, and has great vision to serve balls into the box or take defenders one-on-one.

Lauren Mullen is perhaps the best pure left back in Florida – big, athletic, a great defender, but attacking threat as well. She’s creative and well-composed on the ball, and is very dangerous taking set pieces, too.

Aubrey Riggins of Brandon FC is a tireless central midfielder with great technique and the ability to spray balls at any angle all over the field.

Amber Coca is a center back with great strength in the air and the ability to read the game. She’s a good one-on-one defender with the ability to initiate the attack from back.

Nicole Naclerio is an undersized but technical central midfielder with distribution skills, great composure on the ball and the ability to deal with defensive pressure. She dictates the flow of the game from the middle, and made the national pool at the U14 level.

Miranda Freeman of Team Boca is a center back on Team Boca and the U15 Girls National Team with all the skills to dominate: strength, one-on-one skills, defensive vision and great communication skills to organize the back.
Related: Players To Watch,
Headlines
Club Rankings HQ
View all rankings >>