It’s a mark of the crazy direction that college recruiting has taken on the girls’ side of club soccer, but our May update of the Players To Watch Top 100 2013 Girls ranking includes a number of players who have already decided on a college destination, many others who are targeting this summer as the time to make their final decision on where to go to school.

This is despite the fact that the 2013 class has two full years of high school to complete before going to university. But that’s the reality in college soccer recruiting these days. While a handful of players are quite justifiably holding out (and watch how supposedly-evaporating scholarship money finds a way to stay present until these prospects decide). 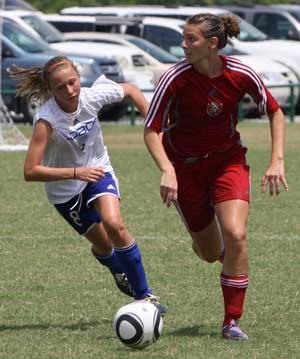 Anna McClung (right)
The difference among some of these top players is razor thin and more than open for debate. Joanna Boyles, Morgan Andrews, Summer Green and Gabrielle Miranda can all stake a claim to the notion of being best in their class. Anna McClung moves into the top 5 by virtue of a monster trip to Spain with Region III ODP and another call-in to the U18 Women’s National Team. None of which is to denigrate anyone in the 6-10 slots.

Other movers for the month include Madeline Bauer, Gabrielle Seiler, Rebecca Schoales, Elizabeth Keester and Sarah Teegarden. Notre Dame commit Antoinette Payne is the lone newcomer to the top 100 this month, the Birmingham United player moving in as another player shifted graduating classes.

The 411: TopDrawerSoccer.com's Players To Watch rankings utilize national rankings out of a 16-region setup.  Every Monday we will feature a national top 100 update for one of four rankings (2012 and 2013 Boys and Girls), while Tuesday through Friday we will update one of these regions for each feature. This way every regional and national list is updated once per month.