1. North Carolina: Anson Dorrance knows how to bring in recruits, and knows that the chase is not over until the pen hits the paper. The Tar Heels landed U17 Women’s National Team members Emily Bruder and Amber Munerlyn late in the game - much to the chagrin of Stanford where the two had previously committed. Dorrance also had Joanna Boyles from the U17 World Cup team previously committed there. The trio join a total of eight players from the IMG Academy 150 that are committed, including Cameron Castleberry, Amanda Rooney and Jenny Chiu. 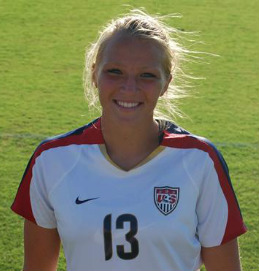 2. Stanford: With three commitments in this class ranked in the top 10 of the IMG Academy 150, it’s pretty much impossible to look past the Cardinal when it comes to judging this year’s recruiting classes. Two of those three -- Madeline Bauer and Jane Campbell -- are veterans of last year’s U17 WNT and are capable of contributing right away. And that’s not all this class has, as Stephanie Amack and Ryan Walker are also signed with the powerhouse.

3. Notre Dame: Securing the commitment of the No. 1 ranked player in the class of 2013 is worth writing home about, and when Morgan Andrews changed her verbal from Boston College to Randy Waldrum’s Irish it was a huge boost for the Indiana school. Along with the U.S. U17 WNT holding midfielder, midfielder Sandra Yu, Rilka Noel and Kaela Little are also among the committed players from the IMG Academy 150.

4. UCLA: Despite head coach B.J. Snow’s departure from the program, it looks like the UCLA Bruins will hold onto all eight of their previously committed players. The class includes former U.S. U17 WNT members Gabrielle Miranda, Lauren Kaskie, and Dorian Jenkins. IMG Academy top 20 player Zoey Goralski (Team Chicago Botafogo) is also on board as well.

5. Portland: Prolific Colorado Rush forward Danica Evans is on board with the Pilots in 2013, but she is not alone. The West Coast Conference program has also U.S. U18 WNT forward Elizabeth Boon headed its way along with a trio of other top recruits.

6. Florida State: The Seminoles class may be small, but it does pack a punch. Three commits rank in the top 40 of the IMG Academy Top 150 for the girls class of 2013. Anna McClung leads the way at No. 3 overall. The forward from Virginia should make an immediate impact.

7. Santa Clara: The bread and butter for recruiting with Santa Clara is in California, but occasionally the right player sparks the interest to look outside those channels. The Broncos found two in this class with U.S. U17 WNT midfielder Morgan Stanton (Colorado) and U.S. U18 WNT forward Jenna Roering (Minnesota).

8. Oklahoma State: There are eight new faces headed to Stillwater in 2013 including two talented goalkeepers hoping to fill in the shoes of AD Franch, the standout netminder for the Cowgirls for the past four seasons. Beyond the goalkeepers, Kristen Killion is the top rated player headed to Oklahoma State. Ranked No. 14 in the latest IMG Academy Top 150, Killion is a talented forward who could make an impact immediately.

10. Penn State: Fresh off the heels of a College Cup final appearance, the Nittany Lions secured another class of blue chip players led by U.S. U17 WNT outside back Brittany Basinger. Other standouts who will compete for playing time in State College include Andrea Gunderson, Salina Williford and Maggie Chapman.