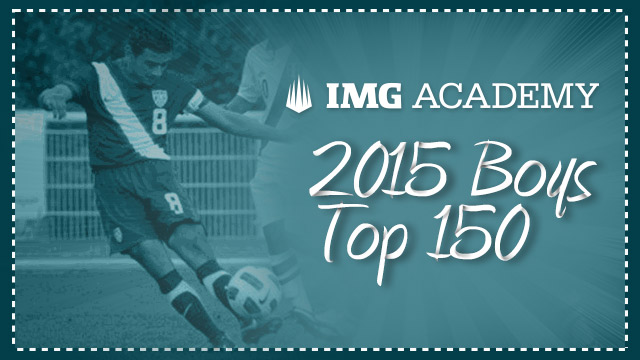 The top player in the Class of 2015 continues to add notches to his belt, spending significant time in Spain with Villareal’s U18 and U19 teams, as well as dominating international competition with the U.S. U18 Men’s National Team. Akale scored the game winner for the U18s in the final of the International Tournament of Vaclav Jezek in August, and was named the tournament’s top player.

Changes to the top 25 include Minnesota Thunder midfielder and UCLA recruit Jackson Yueill, up two spots to No. 15, and Chicago Fire homegrown Collin Fernandez, up five spots to No. 20. Both Yueill and Fernandez were standouts for the U18 Men’s National Team in August. Fernandez recently signed a homegrown contract with Chicago Fire.

A number of players make their debut in this penultimate update to the IMG Academy 150 for the Class of 2015. Click here to see where they are ranked. Seattle Sounders forward Victor Mansaray, FC Wisconsin Nationals midfielder Brady Lenius, Montreal Impact outside back Aron Mkungilwa, and Capital Railhawks Academy-CASL forward Maclean Holbrook all enter the 150 for the first time with this update. Mansaray, a South Florida recruit, has three goals in five matches for the Sounders this season and was a part of the U.S. U18 Men’s National Team trip to the Czech Republic in August. Lenius, a verbal to Saint Louis, commands the midfield for FC Wisconsin’s Development Academy squad which sits in third place in the challenging Mid-America Division. Mkungilwa was named to Canada’s U17 Men’s National Team World Cup team in 2013, but missed the tournament due to injury. He is a key defender on Montreal Impact’s U18s which are undefeated in Development Academy play. Holbrook is making his debut in the Development Academy in his senior year of high school, and already has seven goals to his credit.

In addition to the IMG Academy 150 update, we have made key changes to the regional rankings which will be unveiled throughout the week. Some of the additions include Shattuck St. Mary’s midfielder/forward Damian Clarke, FC Wisconsin Nationals goalkeeper Justin Cook, BW Gottschee forward and Lafayette recruit Grant Burg, San Juan SC center back Max Vallejo-Wollif, and Colorado Rush goalkeeper and Oregon state(m) recruit Carter Auth. Keep checking back to find out where these players are ranked.