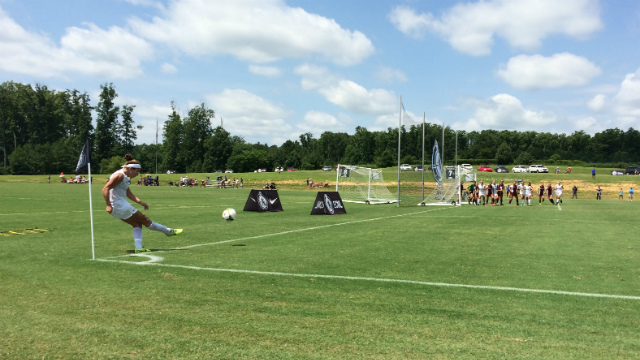 RICHMOND, Va. — The final day of group play at the 2015 ECNL National Finals provided one last opportunity for teams seeking a spot in the championship game.

One more day of play is left after the field is set. Below is a recap of some of Friday’s action.

Makenzie Wright’s Olimpico in the last two minutes punched PDA’s ticket to the U17 title game. In need of at least a point against a stout Slammers side, Wright’s curling effort eluded everyone in the goal mouth, nestling into the back of the net.

It was the second time in the game PDA erased a deficit. A long-range effort from Slammers forward Hailey Stenberg opened the scoring early in the first half, as her blast from distance looped over the goalkeeper and in to put the California club up 1-0.

PDA stormed back with a pair of quick goals, first coming off the foot of Wright, before Nicole Whitley headed home from a free kick.

Set pieces were a common theme throughout the game, and it nearly paid off for Slammers. Midfielder Nicole Leggio was unstoppable in the box, getting on the end of not one, but two free kicks to restore Slammers’ lead and put them on the cusp of the U17 title match.

But Wright stepped up again and delivered, as PDA’s late game pressure paid off and propelled them into first place with the point.

Madison Bennett deposited a bouncing pass of a corner kick into the back of the net with about five minutes remaining to pull West Coast FC into a draw with De Anza Force and clinch a spot in the U16 finals. De Anza Force led for most of the game, using its slick midfield passing to limit West Coast FC’s chances. But each time, West Coast FC had an answer.

De Anza Force took a 1-0 lead in the first half when midfielder Tierna Davidson took a nifty backheel pass from midfielder Luca Deza and slipped it into the goal. West Coast FC tied the game in a confusing sequence later in the half. After an offside call wiped out the apparent tying goal, Mikenna McManus caught De Anza Force sleeping on the restart and intercepted the clear attempt, sending a long pass back up to Sophia Serafin, who beat the goalkeeper.

The Force took the lead again early in the second half when forward Samantha Tran scored after a hectic sequence in front of the West Coast FC net. With great possession in the midfield, De Anza Force seemed poise to clinch a spot in the finals, but West Coast FC made the most of one its final chances to earn the draw and the spot in the championship.

Needing help to get into the title game, Real Colorado took care of business on its own end thanks in part to Sophia Smith’s four-goal performance.

But it was West Coast that started off stronger of the two teams, as midfielder Kailey Smith opened the scoring with a nice long-range effort shortly after kickoff.

Smith jumped into action shortly thereafter, a constant threat to the West Coast defense. She had a prodded shot saved after West Coast took the lead, the one time in the game she missed.

The forward didn’t miss the next time, eventually tying the game with a shot in the box before halftime.

Her surge continued after the break, timing her run perfectly to coast in behind the West Coast back line, rounding the ‘keeper and finishing into an empty net.

West Coast had a good chance to tie the game when Julia Ware hit the bar, but Smith had her hat trick with a 20-yard blast from outside the penalty area.

Kailey Smith added her second of the game with a powerful free kick from distance, but Sophia Smith struck again with an almost identical goal to her third effort to put the game out of reach.

For the second straight game, Real Colorado allowed an early goal and played from behind after Crossfire Premier’s Madison Schultz scored on a cross from Kimberly Hazlett. But Real Colorado worked back, thanks to excellent play from Mallory Pugh. For Real Colorado’s first goal, Pugh gathered a rebound, reset the offense and crossed the ball in to Dakota Wendell, who scored easily. Right before half, Pugh put Real Colorado on top with a right-footed shot to the near post.

In the second half, Real Colorado stymied Crossfire Premier but couldn’t add to its lead. Pugh beat three defenders and the goalkeeper on one play but missed a wide open shot that would have put Real Colorado up by two. But Crossfire Premier tied the game on a deflection in a mess of bodies off a corner. And with the clock winding down, Tveit watched a teammate step over a cross before putting a right-footed shot in the lower right corner.

So Cal Blues scored about 12 minutes into the matchup and continued to keep the pressure on Crossfire Premier while playing tight defense to continue a dominant season. Defender Chloe Boice lofted a corner kick into the box, and forward Penelope Hocking managed to put it into the back of the net after a flurry of shots and saves in front of the Crossfire Premier goal.

Crossfire Premiere’s chances were few and far between and mistakes, such as an offside call, wiped out an opportunity late. So Cal Blues didn’t have much more success, as a penalty kick attempt in the game’s latter stages found the crossbar.