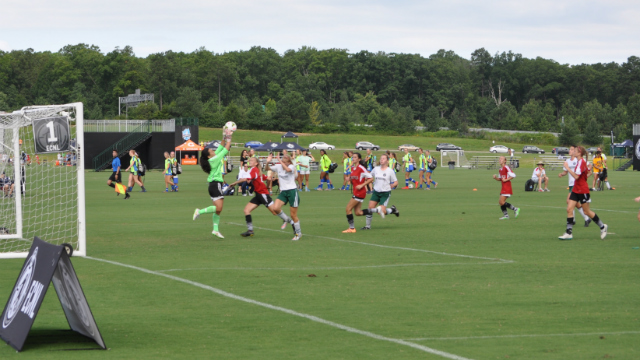 RICHMOND, Va. — Teams took another step closer to clinching spots in the championship game on Day Two of the ECNL National Finals.

Recap a few of Wednesday’s games below.

Dallas Sting knew that Real Colorado’s Mallory Pugh could take over a game at any given moment, so it tried to make sure that wouldn’t happen, with center back Jazmyn Sollars marking the UCLA commit all over the field.

And for most of the game, it appeared the plan would work. Dallas Sting had held down Real Colorado and led 1-0 after Sara Funderburk’s goal, with Pugh sitting on the bench for the latter stages of the first half and the early part of the second.

But with a fresh Pugh on the field in the game’s waning moments, the Real Colorado offense wreaked havoc on the Dallas Sting defense. First, Pugh dribbled into the box and played a bouncing cross toward the far post and connected with Alyssa Kaiser for the equalizer. Then — moments after she pushed a potential go-ahead goal wide — Pugh struck herself after executing a flawless give-and-go with Kelcy Cavarra to give Real Colorado the victory.

The three points propelled Real Colorado into a tie for top spot in Group B with Crossfire Premier, Colorado's opponents on Friday.

The Hawks took a step closer to a first place group finish, holding on to a narrow 2-1 victory against a tough and tenacious D’Feeters side.

Midfielder Emaly Vatne’s brave, sliding finish from an Alexa Spaanstra cross nudged the Hawks out in front during a strong first half display. The D’Feeters defense worked well to disrupt the Hawks attackers aside from that moment, and the Texas side looked to midfielder Taylor Moon and forward Elena Reyna to tie the game.

But Spaanstra struck again early in the second half, this time scoring a goal of her own. A clearance fell to Madison Myers who popped the ball up into the box to Spaanstra, who struck a half-volley into the back of the net for a 2-0 lead.

Reyna pulled a goal back for the D’Feeters to setup a frentic finish, as a direct ball into the box was redirected over Hawks goalkeeper Alexandra DeRuvo into Reyna's path for a simple tap in. It was a just reward for the hard-working forward who troubled the Hawks all game long.

D’Feeters kept the pressure on in search of an equalizer, but the Hawks defense held firm, as center backs Samantha Kleedtke and Diane Senkowski held firm to the final whistle. The Hawks face Colorado Storm in Friday’s action, while D’Feeters take on Texas rivals Solar Chelsea.

A Gabriella Bair goal in the first minute of PDA’s matchup with Eclipse set the tone for the New Jersey side, which produced a suffocating defensive performance for a 3-0 victory.

Bair’s left-footed finish in the game’s early moments came at the end of a nicely worked move at the top of the penalty area, and her sliding strike curled just wide of Eclipse’s diving goalkeeper and into the fine corner.

Eclipse searched for goals through its talented attacking duo of Zoe Redei and Alissa Gorza. But the PDA back line held firm and had a talented forward of its own in Frankie Tagliaferri, who paired well with Bair up front.

Marissa Bosco’s first half effort went just high, one of Eclipse’s best chance of tying the game before the break. Gorzak had an opportunity in the early stages of the second half, but a pair Tagliaferri finishes eventually pushed the game out of reach.

PDA currently sits on top of Group A, needing at least a draw against Slammers FC to secure a spot in the championship game

A goal and assist from Crossfire speedster Madison Schultz was all that Crossfire Premier needed as the Seattle side held firm to close out a one-goal victory against a talented San Diego Surf side.

Schultz produced a poacher’s effort to open the scoring, only to see it quickly canceled out by a Surf set piece goal. The North Carolina-bound forward turned provider shortly thereafter, producing one of the passes of the tournament, finding the run of Asia Brisco with a perfectly weighted balll to restore Crossfire’s lead.

The Crossfire back line dug in to weather the Surf’s attack, as San Diego midfielder Marley Canales snatched at a couple of second half chances, firing high on one instance late in the game.

With the win, Crossfire enters Friday’s final game against Real Colorado tied on points with its opponent.

Time and time again, Gabrielle Brummett has shown the ability to score, and score often.

Another clutch goal for her FC Stars side in the second half proved to be the game winner for the Massachusetts power, which won its second straight game in Richmond. She went on a powerful, surging run into the box and smashed home the decisive goal to overcome Orlando City.

Brummett was also involved in the game’s first goal. Running on to a direct ball into space, her right-footed shot was well saved by Orlando goalkeeper Amanda McGlynn. But her parry fell right into the path of Kelsie Cummings, who tapped home the game’s opening goal.

Orlando hit the crossbar in the second half and eventually found the equalizer when Kaley Verpaele walloped a beautiful right-footed shot into the upper corner to make it 1-1.

It set the stage for Brummett’s powerful, game-winning run, nudging FC Stars into the driver’s seat for first place.

In the finals’ highest scoring game so far, West Coast FC erased an early deficit and stayed on the gas pedal throughout the second half. Shaky defense let Las Vegas Premier take a 2-0 lead early in the first half after goals by forward Hannah Borgel and midfielder Taylor Kornieck.

But the West Coast FC defense tightened and went on the offensive. Erin Kawakami launched a shot from distance that squirted out of out of the goalkeeper’s hands and then Remy Mathews calmly deposited a penalty kick in the back of the net to tie the game 2-2 shortly before halftime.

In the second half, the goals kept coming. Sophia Serafin scored on a breakaway before setting up Sydney Cooper with a beautiful cross. Then Annabella Folino scored on a header to push West Coast FC’s lead to 5-2. Las Vegas Premier got one back when Kornieck scored on a penalty kick, but Mathews converted her second penalty kick of the afternoon to make it 6-3.

In its two finals games, West Coast FC has outscored its opponents 11-4.