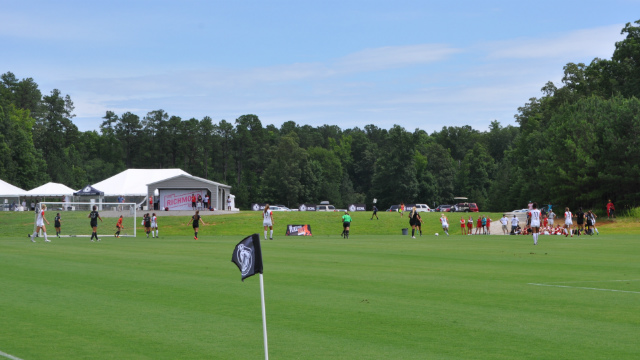 RICHMOND, Va. — Day one of the ECNL National Finals kicked off on Tuesday as 24 teams in the U15 through U17 age groups eyed up a run at a national championship.

There were plenty of goals to go around during the 12 opening matches, with just a single scoreless draw on the day. Below is a look at some of the action from the opening group games.

After playing a scoreless first half that turned into a quagmire when a rain shower rolled through Tuesday morning, the Michigan Hawks broke through against Solar Chelsea and capture their tournament opener, 2-1. Forward Alexa Spaanstra and defender Samantha Kleedtke scored to stake a 2-0 second half lead, and the Hawks defense held off a Solar Chelsea charge that featured a goal from Mackenzie McFarland.

Spaanstra’s goal came early in the second half when midfielder Emaly Vatne launched a cross to the right post and Spaanstra redirected it slightly on a header. Kleedtke doubled the Hawks’s lead by knocking in the ball during a scrum in front of the net after a free kick.

Hawks goalkeeper Alexandra DeRuvo was strong and stopped a few breakaways and forced Solar Chelsea into a number of bad shots. She also got some help when McFarland hit the crossbar early in the game.

The Hawks take on D’Feeters Soccer Club, which played a scoreless draw against Colorado Storm, on Wednesday. Solar Chelsea will face Colorado Storm.

PDA overwhelmed Santa Rosa and was the only U17 team to not play to a 1-1 draw. PDA took a 2-0 lead into halftime after a set piece goal and a penalty kick by Frankie Tagliaferri. Santa Rosa was able to cut the lead to one early in the second half, but PDA proved to be too much.

Tagliaferri scored PDA’s third goal on an individual effort after beating her defender with some nifty footwork and sending the ball into the net on a bounce.

Eclipse Select and Slammers FC both had prime opportunities late to break their 1-1 tie, but each time, something got in the way. A crossbar, a header sailing high, a goalkeeper tipping the ball out of play — each thwarted a potential go-ahead goal in the late stages of the teams’ opening game of the tournament.

Eclipse bagged the first goal when midfielder Lea Waddle redirected a cross from forward Alissa Gorzak in traffic in front of the net. From there, Eclipse Select kept the pressure on Slammers FC goalkeeper Melissa Weck, but Weck held the offense at bay and kept her team within striking distance.

And after a hard Eclipse Select foul in the box in the earlier stages of the second half, Slammers FC found its equalizer from forward Ayana Robles. Defender Alyssa Rocha lofted a number of pinpoint passes into the Eclipse Select box and forwards Julia Bingham and Carly Malatskey made dangerous runs, but Slammers FC couldn’t breach the defense in the run of play.

When Orlando City took a late lead when a striker got loose behind the defense, Match Fit didn’t fold. Instead, it tied the game for the second time Tuesday afternoon to escape with a draw.

Orlando City struck first on a penalty kick early in the game, but a corner from Jillian Jennings found Kelly Ann Livingstone with an open net to tie the game. Throughout the game, Jennings created plenty of Match Fit opportunities with her high corner kicks and free kicks and helped keep the pressure on Orlando City.

Match Fit will face So Cal Blues on Wednesday while Orland City will face FC Stars.

In the game’s waning minutes, FC Stars’s Mackenzie Vlachos sent a looping cross from the right side to the far post and forward Gabrielle Brummett headed it through for the game-winning goal in a tightly contested match.

After a scoreless first half, Brooke Woodard put FC Stars on top early in the second half. But So Cal Blues kept going after FC Stars goalkeeper Alexis Bach. Midway through the second half, So Cal Blues drew a foul in the box and midfielder Celina Alvarez-Gonzalez deposited it in the back of the net.

San Diego Surf midfielder Marley Canales opened the scoring early in the game, as she pounced on a rebound and poked home to give them the lead.

As the two teams wrestled for control in the midfield, Real Colorado’s Mallory Pugh found space in behind the Surf back line, only to see Surf goalkeeper Sumemr Reahe stand up tall and keep San Diego out in front.

It eventually came through Cavarra’s free kick, knotting the scores at 1-1. Pugh had a couple of chances to nudge Real Colorado out in front as the game progressed, but Rahe was up to the task and the score remained level.

After a tough first half stalemate between De Anza Force and Las Vegas Premier entered the break tied 0-0, the Force attack roared to life behind midfielders Luca Deza and Tierna Davidson and the California side pulled away with four goals in the second half.

Las Vegas’ midfield couldn’t slow down the Force’s possession game in the first half, but neither side managed to fashion clear-cut chances. Davidson shifted out to the wing for the second half and immediately created the first goal of the game, cutting back to find Deza who slammed home and make it 1-0.

With the pressure ramping up, Force forward Kayla Fong bounced on a rebound to make it 2-0. Calista Reyes cut into the lead with a far post finish, providing a path for Las Vegas into the game.

But as the second half wound down, Deza added her second goal of the game, tapping home on a cross from the left side of the box, before she setup Samantha Tran to round out the scoring.

Venicia Juarez's hat trick paved the way for Crossfire Premier to open the ECNL Finals in style with a 4-0 victory against California opponents West Coast FC.

Juarez wasted little time to open the scoring, as her free kick found the back of the net with a fortunate bounce to put the Seattle side up 1-0. A threat in and around the penalty area, she scored two minutes later, deflecting a low cross into the back of the net.

West Coast searched for ways back into the game, as forward Mia Roth looked dangerous on the ball, but before the first half was over, Crossfire struck twice more to finish out the scoring, including Juarez's third goal of the day.