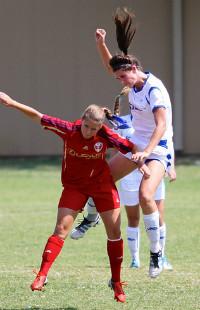 Once again, another promising Texas talent isn’t going to leave the state to begin her college career, as Kate Hajdu made her verbal commitment to be a future Aggie.

And it was pretty obvious what influenced her decision-making process the most.

“I decided to commit to Texas A&M because of the coaches,” she told TopDrawerSoccer.com. “Coach G [Guerreri] and Coach Stevenson are awesome. I felt that they knew me as a player better than any of the other coaches I visited or talked to. Not only did they make me feel comfortable and valued, I believe they can make me a better player.”

The defensive midfielder admitted that she would leave her home state for school, but the more schools she saw outside the state, the more she wanted to stay right at home to play soccer.

“Texas A&M has a long tradition of success,” she said. “Its program is awesome, its facilities are world class, and the girls on the team are serious about soccer but also a lot of fun. And, maybe most important factor is that I believe that Texas A&M will win the first National Championship for the state of Texas, and I want to be part of that.”

“I want to be a teacher,” she told TopDrawerSoccer.com. “Siena is an important part of the local community and the opportunities to student-teach, and interact with the Siena faculty are very good.”

The soccer program obviously struck a chord with the FC Bucks attacker as well, and she felt that at Siena she could find the right mix of a good soccer atmosphere and high academic standards.

“From a soccer perspective, I liked the girls and Coach Karbowski, very much,” Horst told TopDrawerSoccer.com. “They were very welcoming. The team takes soccer and schoolwork very seriously. There's a long streak of Team Academic Awards from the NSCAA and the plaques are very prominent in Coach's office.  That means a lot to me.”

The school itself helped sway her decision as well.

“The campus is beautiful,” Horst said. “Everyone I met, in and out of athletics, was very welcoming. Siena also has excellent on-campus housing for all 4 years of school, with townhouses for the juniors and seniors. That's good for the athletes who spend so much time training and on campus.”

Defender Kennedy Kraft (Slammers FC) committed to Ohio State for the class of 2014.

Forward Hailey Skolmoski (Utah Avalanche) committed to Utah for the class of 2015.

Defender Jessica Donnelly (New Jersey Wildcats) committed to Wagner for the class of 2014.

Defender MacKenzie Gouner (Real Colorado) committed to Tennessee for the class of 2015.

Midfielder Erin Trapp (PDA) committed to Purdue for the class of 2015.

Midfielder Katherine McDonald (CASL) committed to Duke for the class of 2015.