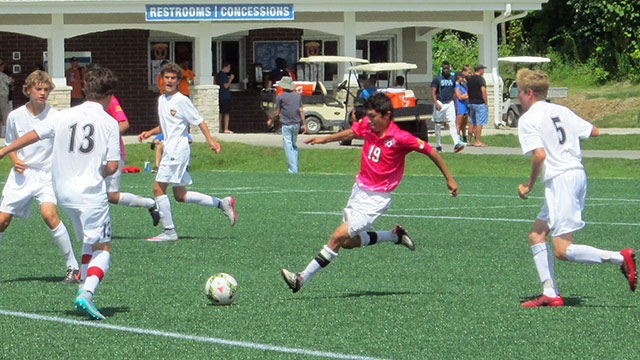 WESTFIELD, Ind. — Sunday's NPL semifinals raised the stakes as teams from all over competed for a chance to make it to the final day of the tournament.

Here's a look at some of the day's most notable games.

EGA's Patricia Kliver had an answer just minutes later, knocking in the tying goal to even the score at one apiece.

The rest of the first half looked to be a defensive battle, as both teams had a difficult time getting back in tune offensively. But in the final minutes of the first half, McGuire broke up the dry spell and scored another goal giving NEFC a 2-1 going into the half.

Both teams had a couple opportunities to score off corner kicks in the early going of the second half, but neither could manage to score.

In the 63rd minute NEFC's Taylor Kofton scored, extending her team's lead to 3-1. Another NEFC goal was scored just ten minutes later, coming from again forward McGuire for her third goal of the game.

EGA fought until the final seconds, getting a goal from Alexis Kajdasz to ravage the NEFC victory to a final score of 4-2.

NEFC Elite will take on FC Virginia United in the NPL U15 Girls Finals Monday at 11 a.m. The NEFC’s U15 Girls team will be one of four Girls NEFC Clubs in Monday’s slate of Championship matches.

The New Jersey Dynamite and Oakwood Soccer Club squared off in a rematch on Sunday, with Oakwood seeking revenge after Saturday’s 3-1 loss.

Similar to Saturday’s match, both squads scrapped for scoring opportunities in the early minutes, looking to set the tone with the opening goal. New Jersey had two shots bounce off the post in the first 25 minutes, but could not punch one to the back to the net.

Then after an Oakwood foul in the box lead to a penalty kick, New Jersey’s Shannon Burns lined it up and sunk the PK to give her team a 1-0 lead. Casey Richards followed the act by scoring another goal for New Jersey just two minutes later, giving New Jersey a 2-0 halftime lead.

The Dynamite continued rolling in the early second, as Richard’s cross connected with Olivia Szeker-Cortes to make it 3-0.

Szeker-Cortes scored again in the 56th minute to nearly guarantee a Championship appearance for New Jersey. Oakwood fought late and was able to scratch across a goal from Bailey Julian in the 65th minute, but it was too little too late.

New Jersey’s 4-1 victory puts them in the U17 Girls Championship game Monday at 9 a.m. against Massapequa SC Crush.

The New York Red Bulls U13 Boys team had its second straight win by five goals or more on Sunday, proving they’re more than ready for the U13 Boys Championship.

A goal in the first two minutes got the team rolling and in the 19th minute another great Red Bulls’ goal was scored. Aziel Jackson had an outstanding lead pass to Dylan Sullivan who finished off the play with a goal, extending the Bulls lead to 2-0.

New York was able to build on their lead just before the half as Jackson headed one in to make it 3-0.

It would be another rough half for FC Boulder, who struggled the whole game to get into an offensive flow. Boulder had an own goal in the 50th minute to push the Red Bull lead to 4-0, which was then increased once more in the 64th minute as Sullivan scored again.

Sullivan completed his hat trick in the final minutes of the game, blowing Boulder out of the water to a 6-0 defeat.

The New York Red Bulls will advance to the U13 Boys Championship where they will face St. Louis Scott Gallagher on Monday at 11 a.m.