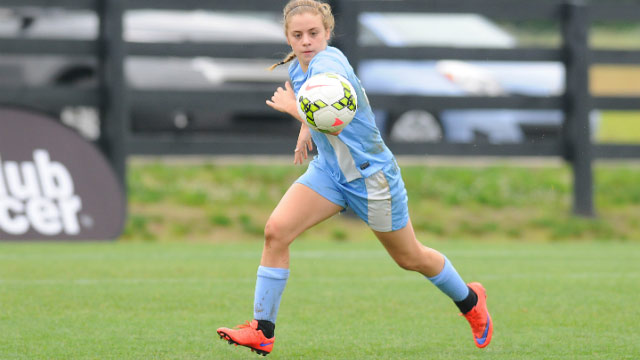 WESTFIELD, Ind. — Day one of the National Premier Leagues Finals kicked off at the Grand Park Sports Complex on Thursday, but not without pushing all games back three hours due to inclement weather.

Here’s a look at some of the notable games from day one.

Manhattan Santos began their week with a red-hot start, scoring their first goal in the NPL Finals just four minutes into their first game.

Manhattan’s Caitlin Shoemaker put one in the back of the net from just outside the box, which forced the Eclipse to play from behind right from the get-go.

The Eclipse had a chance to answer around the 30th minute with a free kick just ten yards outside the box and straight on with the goal. They couldn’t convert however and went into the half still trailing by one.

Then about halfway through the second half, with time not on their side and a goal in need, the Eclipse had a chance to even the game. Eclipse Midfielder Clair Wehrly had a wide-open shot in the box, but was denied by the Santos keeper.

Manhattan went on to stretch their lead to 2-0 after a Shoemaker pass connected with Rain Condie to put away the game late in the second half.

Both Santa Clara Sporting and Vardar have fast-pace styles and the weapons to score multiple goals in a short period of time, but the clash of quickness didn’t play out how some might’ve thought.

Forward David Hernandez’s goal pushed ahead Santa Clara to a 1-0 lead early in the first half, a lead they would not surrender.

Vardar had its chances to answer with a fast break from Kelsey Turner who had an opportunity to knot up the game, but missed wide. Just ten minutes later a Vardar free kick ricocheted off Santa Clara’s keeper and was shot again but missed right.

Hernandez scored another goal for Santa Clara just a few minutes before the final whistle was blown to seal the deal for a Sporting victory.

Vardar will look to avoid losing two straight taking the field again Friday at 9 a.m. to face Seattle United B00 Copa and Santa Clara will also play at 9 a.m. where they will battle the Soccer Plus Academy NPL-00.

FC Golden State vs. NEFC Elite was the only U17 Boys game that finished in a tie Thursday, which allows both teams to stay in contention with Flight B.

A NEFC Elite goal struck the net not even five minutes in, but would be the only thing NEFC had going for them offensively, as they were then held to just one more shot the rest of the half.

In the 73rd minute a NEFC penalty in the box gave Manny Chavez a chance to put Golden State on the board and tie up the game at one. Chavez picked his spot and buried it.

NEFC didn’t take long to respond. Nearly one minute after Golden State evened the score, Abdulkadir Haji scored to put his team back up by one.

Fighting to keep Golden State’s hopes alive, Jesus Grandos took over on offense to once again tie it up, but this time a tie that would not be broken.

Golden State had multiple crosses that could’ve led to goals late in the game, but were unable to make use of any, as the NEFC defense was just too strong.

The PDA Force girls U18 team had a busy, but successful first day at the NPL Finals, winning both of their games on Thursday.

PDA headed into their 6 p.m. game looking to ride the momentum from their 5-1 win over NW United FC98 Premier Powell earlier in the day, and did just that edging past the Michigan Hawks 1-0.

The Force controlled the majority of the possession in the first half, keeping the Michigan defense on their heels. PDA had several corner kicks that had potential to turn into goals, but couldn’t get a clean shot and led to a scoreless first half.

Shortly after the second half commenced, PDA’s Gianna Pizoli scored the lone goal for the Force. Harley Gorzelski attempted to get the Hawks back in it, but her two shots on goal were both saved by the PDA goalkeeper.

Both teams are back in action on Friday at 3 p.m. PDA will take on NEFC Elite U18 Girls, while the Michigan Hawks will face NW United FC98 Premier Powell.