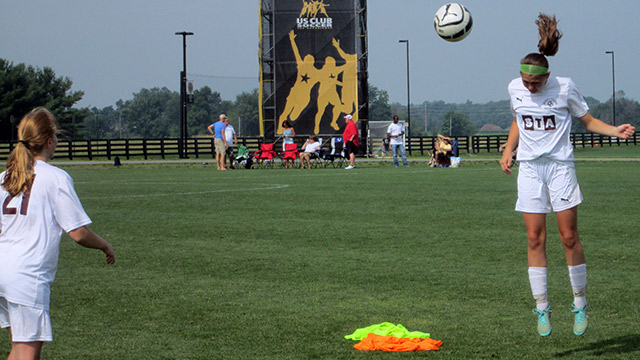 WESTFIELD, Ind. – Many teams punched their ticket to the semifinals on the last day of group play, but not without some late game drama.

Here’s a look at Saturday’s slate of games covered by TopDrawerSoccer.

The two undefeated teams in the U15 Boys Flight B group squared off on Saturday, vying to take control of their group and earn a trip to Sunday's semifinals.

The much-anticipated matchup did not disappoint.

In the opening two minutes, Chicago PSG set the tone early as Andrew Van Nispen's pass connected with Rade Novakovich to give PSG a 1-0 lead.

PSG kept the SC De Sol keeper on his heels for the rest of the first half, firing off five scorable shots. In the 21st minute Novakovich had a shot in mid air that got past the keeper but was saved by a Leebrook defenseman at the last second.

In the opening minutes of the second half, Kyle McCurley assisted William Beebe’s goal to give PSG a convincing 2-0 lead. But the game was far from over.

A great pass from Reed Meyer to Zarek Jakubowski resulted in a goal for SC Del Sol in the 47th minute, giving Del Sol a flash of hope.

Then in the 63rd minute Del Sol’s Ricardo Navarro Ramirez had a header that tied the game and two and completely shifted the momentum. Neither team could break the tie in the closing minutes.

Despite the teams finishing in a tie in the group with seven points apiece, SC Del Sol will advance to Sunday’s semifinals due to a higher goal ratio (11 GS, 3 GA) than the Chicago Magic (10 GS, 4 GA).

Needing a win to have any chance at making the semifinals, LA Premier was determined to put themselves in a position to make a late-week push.

LA was off to a quick start as forward Jacob Hughes recorded a goal in the first five minutes of action. Nearly five minutes later, Hughes scored another goal to give LA a demanding 2-0 lead.

Weston, who was fighting for its first win of the week, would battle their way back. In the 14th minute Weston’s Jake Morris scored to cut the LA lead in half, 2-1.

With both teams fighting for a much-needed victory, things began to get scrappy. Tempers began to flair, as there were a total of six total cards given out within a 20-minute span. During that span Weston was awarded a yellow-to-red and was a man down the rest of the way.

Hughes and the LA offense benefited from the advantage, as he put in his third goal in the 75th minute to get the hat trick and seal the deal for LA.

A WPFC B98 Black loss to St. Louis Scott Gallagher gave St. Louis and LA a share of the Flight B lead with six points each, but allowed LA to move on to the semifinals as they had beaten St. Louis earlier in the week.

LA Premier will face Campton United 98 MDL in the semifinals at 9 a.m. on Sunday.

Saturday’s game between the New Jersey Stallions Dynamite and Oakwood Soccer Club was a clash of the undefeateds in Flight A, and would allow the winner a guaranteed spot in the semifinals.

Both teams got off to a slow start, taking them each 20 minutes before they could even get off a shot on goal.

In the 27th minute New Jersey’s Shannon Burns booted in a corner kick for the game’s first goal, putting New Jersey up 1-0. A cross from Tomison Kennedy connected with Casey Richards nearly ten minutes later, granting New Jersey a 2-0 lead heading into the half.

Oakwood wouldn’t go down without a fight as Mara Cosentino scored to make it 2-1 PSG in the 51st minute. Oakwood squandered the rest of its scoring opportunities however, and lost its energy after a Ida DiClemente goal in the final minutes pushed the lead to 3-1.

The two teams will have a rematch in the semifinals on Sunday as New Jersey was an automatic bid winning Flight A, and Oakwood had the best goal ratio of the remaining three second-place teams.

Both NEFC Elite and CV Magic needed a win and a Scottsdale Blackhawks loss on Saturday to have a chance at making the semifinals, and neither ended up happening.

In a very slow first half, both teams struggled getting into any offensive rhythm. Neither team had success getting to the box in the first half, putting up just one shot each.

The second half looked to be another offensive slump for both teams, but suddenly became interesting as Camille Lafaix put the Magic up 1-0 in the 62nd minute.

As time was winding down and it appeared as if the CV Magic were going to keep their hopes of making the semifinals alive, NEFC’s Riley Soares scored the game-tying goal just before the final whistle was blown.

NEFC Elite and CV Magic finished with four points each in Flight A and are eliminated from the NPL Finals.