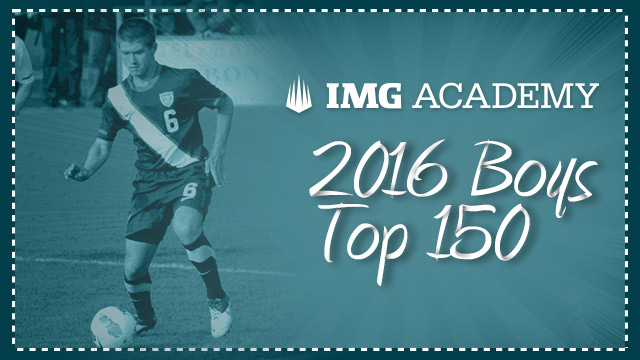 The 2016 Boys IMG Academy Top 150 fall update is out today. Benny Swanson and Daniel Barbir each move up a couple of spots into the second and third overall after successful international trips with youth national teams in October. Swanson is the only member of the 2016 class to see minutes with the U18 MNT at the Limoges Tournament in which the USA took second place, while Barbir helped the U17 MNT to a 1-0-2 result in three friendlies with Spanish clubs.

BW Gottschee midfielder Conor McGlynn and New York Red Bulls forward/midfielder Dantae Greer impressed our staff at recent TDS Combines in New York and Philadelphia, and saw their rankings rise as a result. McGlynn, who climbs from #95 to #56, is a hardworking, creative midfielder with a good eye for a pass, and received multiple recommendations for his ranking. Greer, who was not previously ranked, was quick, smart, and dangerous at the Combine and debuts at #145.

In addition to the IMG Academy 150 update, we have made key changes to the regional rankings which will be unveiled throughout the week. Some of the additions include Bethesda-Olney center back Alonzo Clarke, Shattuck St. Mary’s midfielder Jasper Malamud, Virginia Rush goalkeeper Duncan Wrenn, and United German Hungarians defender/forward Jacob Kemery.