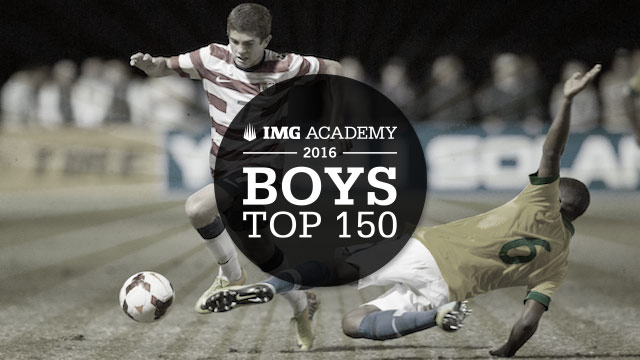 The winter update for boys in the 2016 graduating class is out today, and Christian Pulisic remains the No. 1 player in the IMG Academy Top 150. The Pennsylvanian scored a brace in the U17 MNT’s win against England at the Nike Friendlies in December and continues to be the clear leader for this group. Luca de la Torre is thriving at Fulham, climbing to No. 3, while Alexis Velela is performing well as part of the U17 Residency program, and rises into the top ten at No. 10.

Several players making significant moves up the ranks this quarter include PDA midfielder James Murphy, CSA Wolves forward Giuseppe Barone, and Solar Chelsea forward Dwight Williams. Murphy starts for PDA’s U18 Development Academy squad, ranked No. 7 in the Grande Sports Academy TeamRank Top 25, and is now a regular with the U.S. U18 Men’s National Team, recently travelling to Spain and Mexico. His performance has garnered interest from many top college programs, helping raise his ranking to No. 31. In recent months, Wolves’ Barone earned an invitation to the Select Game at the Development Academy showcase, recorded two assists in the scrimmage, then received an invitation to join the U17 Residency Program for the spring semester. He has verbally committed to Michigan State and raises his ranking to No. 49. Williams has started every game for the Solar Chelsea U16s, scoring 11 goals to lead the team. While at the Disney Showcase over the New Year’s holiday, the recent verbal to SMU earned a Best XI nod from TopDrawerSoccer.com, and raises his ranking to No. 65.

Among those to make their first appearance in the IMG Academy 150 are San Juan SC defender David Burns, Sporting Iowa forward Elvir Ibisevic, and Seattle Sounders midfielder Harrison Kurtz. Last month, Burns earned his first call up for the USA at any age group, and started every match for the U18 MNT at the Copa Chivas tournament in Guadalajara, entering our rankings all the way at No. 50. Ibisevic is a product of Sporting Kansas City affiliate Sporting Iowa, and was discovered by youth national team staff at the 2014 ODP Interregionals in December. His performance earned him an invitation to Residency for this spring as well as a No. 69 ranking. Kurtz is a standout midfielder and regular starter with the Sounders U18s, earning a spot at No. 113 with this update.

In addition to the IMG Academy 150 update, we have made key changes to the regional rankings which will be unveiled throughout the week. Some of the additions include Chicago Magic PSG forward Albert Arabik, Bethesda Olney center back Griffin Bouchard, Baltimore Celtic defender Andrew Hopkins, New York Red Bulls midfielder Jared Gilbey, and many more.