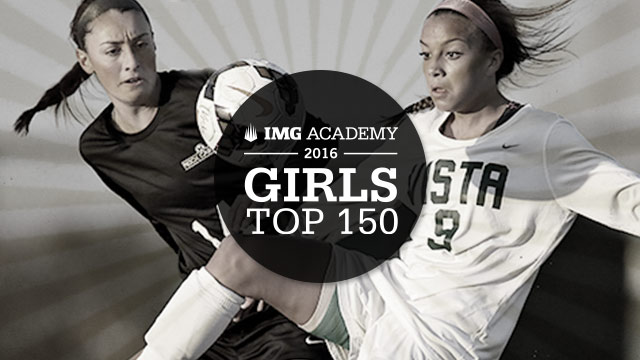 The fall update for the 2016 girls IMG Academy 150 is out today, and there are two players climbing within the top 20. De Anza Force midfielder Tierna Davidson and CASL center back/forward Taylor Otto both travelled with the U.S. U20 Women’s National Team to Honduras for their first international trip at this age group. Davidson, a Stanford recruit, has become the nation’s best holding midfielder in this class and went the full 90 in the U.S.’s 5-0 win over Honduras last weekend. Otto played 30 minutes in central defense in Honduras, and is the leading scorer at forward for her CASL ECNL U18s, having scored four goals in just two matches so far this season. Davidson enters the top 10 at No. 10, while North Carolina recruit Otto climbs to No. 19.

End of season tournaments and camps let several players shine over the summer. Our scouting network took notice and their rankings improved as a result. NJ Stallions Dynamite center back and Columbia recruit Amayla Johnson earned a spot on the TDS best xi list for the USYS Region I Championships where her level of comfort playing out of the back impressed our staff. Tampa Bay United’s Brianne Folds, an Auburn verbal, impressed enough at the US Youth Nationals to earn a daily best accolade, and several days later scored the game winner in the semifinals against Carlsbad Elite. Penn Fusion forward Meghan McCool has earned a couple of call-ups with the U20 WNT and will head to Virginia when her senior year is in the books.

More than a few players are peaking just as their high school careers come to a close, making our list for the first time. Internationals midfielder/forward Christina Trickett, Solar Chelsea defender Katina Tsapos, Boca United defender/forward Danielle Antieau, and Lonestar defender Sophie Taylor all debut in this penultimate update of the IMG Academy 150 for this class.

Trickett finished last season in the ECNL with 12 goals and 10 assists from her attacking midfield position, and is poised to lead her team again once the season starts in November. She could earn some playing time her freshman year for Tiffany Roberts’ UCF, with four midfielders graduating from this year’s roster. SMU recruit Tsapos is a good 1v1 defender that is one of the best in her region at her position. Clemson recruit Antieau can play either in defense or as a forward, and has two goals in five matches to help her Boca United squad to a winning record in their inaugural season in the ECNL. Taylor is another Auburn recruit in this class that was very highly recommended for this list.

Not only has the IMG Academy 150 received scrutiny, but the regional lists have been updated as well. Keep checking back this week as we unveil newcomers such as Orlando City FC forward Ashley Kreinbring, New England Aztec, Boston Breakers, and Pingry School midfielder/forward Kerri Zerfoss, Continental FC Delco center back Taylor Newhart, Utah Avalanche center midfielder and Pepperdine recruit Ashley Buck, and many more.