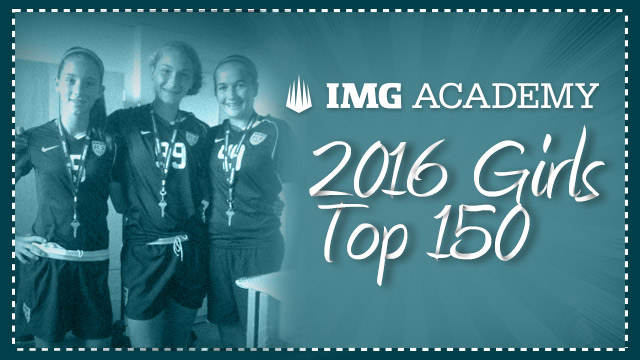 The fall update for the 2016 girls IMG Academy 150 is out today, and Mallory Pugh remains No. 1.  The Real Colorado forward hasn’t been with her club team much lately, spending her February with the U17 Women’s National Team in California where she scored the game-winner in the final of the NTC Invitational, then with the U20 WNT as its youngest invitee.

Jennifer Westendorf, Sunny Dunphy, Julie Mackin, and Amanda Dennis all make moves up the ranks of the IMG Academy 150 with this update. GSA’s Westendorf, a forward committed to Notre Dame, has a whopping 37 goals combined with seven assists in ECNL play this year, and after not being rostered with the U17 WNT for World Cup qualifying, was called into camp in January. Westendorf, who ticks up one spot from No. 7 to No. 6, also was selected as part of the TDS Best XI at the ECNL event in Texas. Dunphy, a forward from southern California club Carlsbad Elite, is a leading scorer in the US Youth Soccer National League with four goals in four games, and was selected by our staff as one of the Best XI on the first day of the ODP National Championships. Dunphy climbs two spots to No. 24. Real Colorado midfielder Mackin, a Clemson recruit, has had no problem taking over in the absence of teammate Pugh, helping Grande Sports Academy TeamRank No. 1 Real Colorado keep that ranking by adding 10 goals and assisting on six others, while raising her own stock four spots to No. 37. Finally, Slammers goalkeeper and Penn State commit Amanda Dennis climbs from No. 86 to No. 80 and like Dunphy was named to the Best XI at the ODP Championships. Dennis and teammate Caitlin Leahy have split time in goal for Slammers, allowing just six goals all season.

Among the players new to the rankings this update are Concorde Fire discovery player Taylor Hallmon, Real So Cal forward Julia Pedati, and Texas Rush goalkeeper Emily Alvarado. Hallmon, a defensive midfielder whose home club is Ponte Vedra SC in Florida, has played in almost every match for Brian Moore’s Concorde Fire U16s out of Atlanta, was invited to ODP National Camp in January of this year and has committed to play her college soccer for Florida State. Pedati has 15 goals for the Real So Cal’s U16s who sit in fourth place in the ECNL Southwest Conference, and received multiple recommendations to be added to the rankings. Alvarado was the starting goalkeeper last fall for the U17 Mexican WNT during world cup qualifying, stopping an amazing four penalties in the semifinal match. Click here to see where these players are ranked.

Not only has the IMG Academy 150 received scrutiny, but the regional lists have been updated as well. Keep checking back this week as we unveil newcomers such as VSI West Fl Flames defender Dominique Nelson, Minnesota Thunder outside back Hannah Cade, World Class FC midfielder/forward Sara Scire, Match Fit Academy forward Olivia Vaughn, Pleasanton Rage defender Jessica Ko, and many, many more.