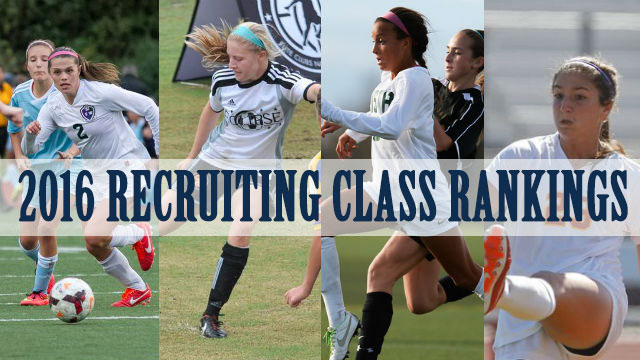 The Pac-12 and the ACC are the places to be in women’s soccer.

It’s an obvious statement, but when surveying the level of college soccer over the past few season and perusing upcoming college commitments, the two conferences continue to lure the best players.

And the class of 2016 looks to be no different, as the first 2016 girls recruiting rankings reveals. A number of the best programs in the nation are included, as TopDrawerSoccer.com takes an early glance at which program has some of the best recruiting classed lined up for next year.

The rankings will be updated on a regular basis ahead of next year’s Signing Day as more players verbally commit.

This class looks like a doozy, with the top two ranked players from the IMG Academy Top 150 and U.S. youth internationals Pugh and Canales. Jessie Fleming is a top player in Canada’s setup who could end up playing at this summer’s World Cup. It’s hard to imagine anyone taking over the Bruins at No. 1.