The 2017 Boys IMG Academy Top 150 debuts today, and FC Richmond midfielder Nicholas Taitague is #1. Taitague pulls the strings in midfield for the U.S. U14 Boys National Team, is dynamic on the ball, and has a great change of pace. He also participated in US Club Soccer’s id2 International Tour in March, where he caught the eye of more than a few international scouts. Joining Taitague at the top is the U14 BNT center back duo of Kyle Gruno (PDA) at #2 and Tyler Adams (New York Red Bulls) at #3. The coupling of Adams’ athleticism with Gruno’s vertical abilities and distribution out of the back deems both of them near the top of the list. Rounding out the top five are DC United midfielder Jose Carranza at #4 and Alliance SC defender Edwin Lara at #5. 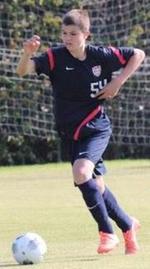 For this first list, recommendations poured in from all over the country, and the following are just a few more of the over 300 players that were recommended. Colorado Rush midfielder Ryan Crowley, at #32, is one of the few eighth graders who has earned a full-time position on the Rush U16 Development Academy team, starting nine of the 15 games in which he has played. BW Gottschee center midfielder Marcos Martinez, at #42, is the star of Gottschee’s U13 Pre-Academy team that has suffered just one loss this season in the Northeast Pre-Academy League. And Valley United midfielder/forward Noa Harrisson, a member of the U14 BNT and the US Youth Soccer Region IV teams, lands at #50.

In addition to the IMG Academy 150 update, we will unveil the first regional lists for the class of 2017 throughout this week. Some of the players who made these lists include Atletico Santa Rosa defender Filiberto Torres, Dallas Texans midfielder Paxton Pomykal, FC Boston Bolts midfielder Jack O’Brien, St. Louis Scott Gallagher defender Aedan Stanley, and United FC goalkeeper Matthew Reich. Keep checking back to see who else made the lists.