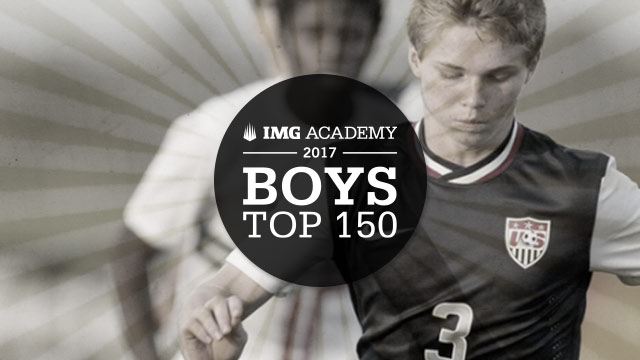 The spring update is out, and changes dot the rankings in the IMG Academy Top 150 for boys in the 2017 graduating class. Two players, Eric Lopez and Carson Vom Steeg, enter the top five for the first time. Lopez, of LA Galaxy II, has consistently performed for the U18 Men’s National Team and climbs to No. 4. Vom Steeg, verbally committed to Jeremy Gunn at Stanford, has been named captain of the U18 MNT and is garnering interest abroad as well, which helps his rise to No. 5.

Significant moves scattered throughout the rest of the rankings include midfielders Andrew Paoli, Stirling Russell, and Witt Conger, as well as forward Griff Dorsey. Paoli, a UCLA recruit, when not helping his San Jose Earthquake U16 squad to a spot in the postseason, has spent significant time with the U18 MNT. Russell, who has given a verbal commitment to Washington, attended January’s U18 MNT camp, and is a significant contributor to the Sounder’s U16 scoresheet with seven goals on the season. New to the Railhawks Development Academy this season, Conger has quickly become a super-sub for the Raleigh side’s U18s, scoring eight goals in just 11 starts. And Dorsey, also a member of the U18 MNT, has spent significant time with the Colorado Rush U18s as a 1999 birth year, and is verbally committed to Indiana.

New to the rankings with the update are players who are either tearing up the scoresheet for their club side, or successfully keeping that sheet clean.  Vancouver Whitecaps forward Alan Camacho Soto is the leading scorer in the Development Academy U16 age group, with 29 goals in 31 matches, leading his team to one of the top seeds in the upcoming playoffs. Blanco earned recognition last year as one of the top players for Arlington SA at the USYS Region I playoffs, and has continued that success while transitioning to DC United’s Development Academy, scoring 10 goals and earning a starting spot in the midfield for playoff-bound DCU’s U16s. Mazzola has been a starting goalkeeper for Everton FC Westchester for eight years running, and is being recruited by a number of top schools. Rojas has helped his Oakwood U16s to the top spot in the Northeast Division, and can play either center back or right back positions.

In addition to the IMG Academy 150 update, we have made key changes to the regional rankings which will be unveiled throughout the week. Some of the additions include the Albertson center back duo of Coby McGregor and Orlando Zambrano, Everton FC Westchester midfielder Kristian Shkreli, Charlotte SA defender Taylor Suber, Texans SC Houston goalkeeper Andrew Morrison, and many more. Keep checking back to see who else made the lists.