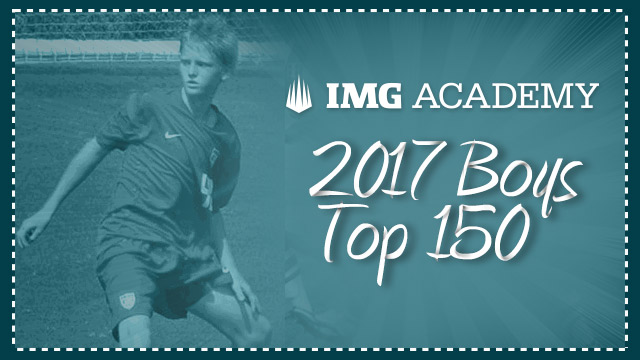 The 2017 boys IMG Academy Top 150 spring update is out today, and the top ten have all spent significant time in the first half of 2014 travelling with youth national teams. Among them, U17 Residency member John Nelson continues to impress and breaks into the top 10 at No. 10.

A couple of forwards make the most significant jumps in the top 50 this quarter. FC Golden State’s Marty Raygoza moves into the top 30 at No. 26 on the heels of three successful trips with the U.S. U15 Boys National Team, and LA Galaxy’s Hanif Wright climbs from No. 58 to No. 31. Both forwards scored in the U15 MNT’s 3-2 win over China PR U16s in Italy, and both have made significant contributions to the scoresheets of their respective Development Academy sides, Raygoza with 11 goals in 14 matches, Wright with 15 goals in 17 matches.

But Raygoza and Wright were not the only forwards to turn heads with this update. Another FC Golden State product, Kevin Aguilar, is the leading scorer in the U14 Development Academy’s southwest division as well as the nation with 29, just passing former top scorer Kaya Fabbretti, and his ranking vaults from No. 124 to No. 68. New York Red Bulls forward Zach Ryan climbs from No. 96 to No. 70, is the Red Bulls leading scorer, and has led his team to the top spot in the Grande Sports Academy TeamRank Top 25.

A few players making their debut in the IMG Academy 150 with this update include Kendall SC defensive midfielder Gabriel Paniagua at No. 82, St. Louis Scott Gallagher Illinois defensive mid/center back Orlando Arreola at No. 97, San Jose Earthquakes midfielder/forward Evan Valencia at No. 99, and Colorado Rush center back David Solis at No. 115. Paniagua is a regular starter in the midfield for Kendall’s U16s that lead the southeast division; Arreola, a starter for Kevin Stoll’s U16s, is a good ball winner and reads the game well; Valencia has 23 goals on a team where that is only second best to Febbretti, and Solis has started all but one match at center back for Mike Piserchio’s U16 squad that sits third in the tough frontier division.

In addition to the IMG Academy 150 update, we have made key changes to the regional rankings which will be unveiled throughout the week. Some of the additions include Strikers FC forward Thomas Williamson, Indiana Fire midfielder Richard Bennett, Arlington Strikers midfielder Nelson Flores, Empire Revolution goalkeeper Josh Mahr, and many more. Keep checking back to see who else made the lists.