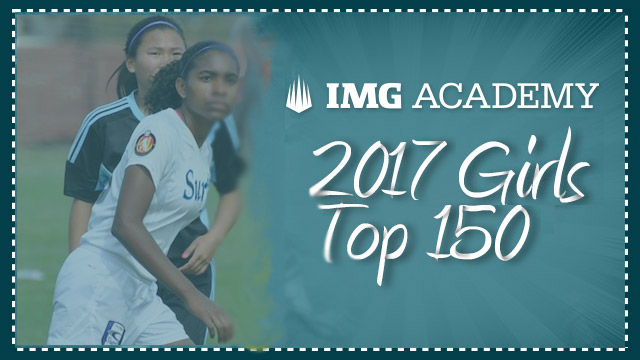 The IMG Academy Top 150 for girls in the 2017 graduating class is out today, and San Diego Surf forward Catarina Macario is #1. The Brazilian-American has 39 goals for ECNL SoCal Conference leader Surf, 13 of which were earned in a two week period in May. As the youngest player on the U.S. Soccer U15 Girls National Team, she scored three times at camp this past February. Surf U14 ECNL coach Chris LeMay told TopDrawerSoccer.com, “she is the most special player I have ever coached,” and made comparisons to Tiger Woods and Michael Jordan when referencing the level of her play. 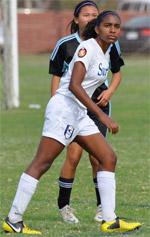 The rest of the top five are as follows: Dallas Texans forward Madison Haley at #2, De Anza Force midfielder Luca Deza at #3, Dallas Texans midfielder Haley Berg at #4, and Albertson SC center back Caitlin Cosme at #5. Haley was erroneously ranked with the 2016 graduating class at our last update, and is the only member of the 2017 class to travel with the U17 WNT to the 4 Nations Tournament, where she scored three goals. Deza has attended U14 and U15 GNT camps, as well as several US Club Soccer id2 camps, and is the assist leader for a team that has been pegged to have the second best offense in all ECNL age groups. Berg and Cosme, in addition to their national camp invitations, were named standouts by our scouts.

For this first list, recommendations poured in from all over the country, and the following are just a few more of the almost 300 players that were recommended. Prolific goal scorer Gabrielle Brummett of FC Stars lands at #8 on our list after scoring a Macario-tying 39 goals so far in ECNL play, followed closely by Colorado Rush forward Civana Kuhlmann who has scored 29, and lands at #16. Defenders who made our initial list include West Coast FC goalkeeper Hillary Beall at #14, De Anza Force outside back Kailee Gifford at #21, Heat FC defender Kayla Eason at #49, and OP Eagles center back Riley Gruenbaum at #98.

In addition to the IMG Academy 150 update, we will unveil the first regional lists for the class of 2017 throughout this week. Some of the players who made these lists include Mustang FC midfielder Nicole Rivas, Heat FC midfielder Taylor Garza, Albany Alleycats defender Ilana Albert, and Premier SC goalkeeper Ashley Gabor. Keep checking back to see who else made the lists.