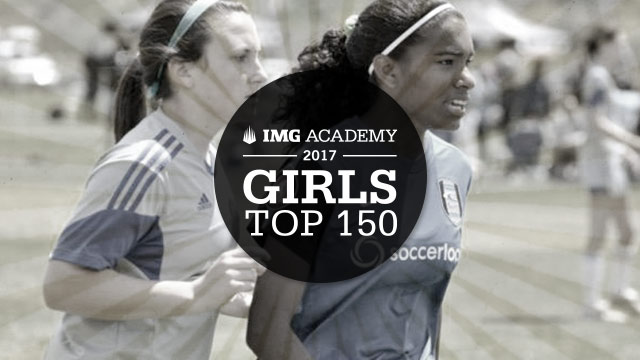 The IMG Academy 150 winter update for girls in the 2017 graduating class is out today, and Ashley Sanchez is the new No. 1. The So Cal Blues forward was the youngest player on the U.S. U20 roster for the Four Nations Cup, and received significant minutes as a sub in each of the three matches.

Players moving up the ranks with this update include two players from the northeast and a forward from Southern California.

FC Stars of Mass forward Gabrielle Brummett and Connecticut FC midfielder Ciara Ostrander had good performances at the New Jersey ECNL event over Memorial Day weekend. Brummett, a Duke commit, scored eight goals in the three matches and earned a spot on TopDrawerSoccer.com’s Best XI list for the event, while Ostrander, a verbal to Yale, netted the game winner against a tough Slammers squad on Saturday, and helped her team to finish the weekend undefeated.

San Diego Surf’s Arlie Jones, a USC commit, is coming into her own as one of the best forwards in the nation. As the second leading scorer for the tenth-ranked team in the Grande Sports Academy TeamRank Top 25, Jones earned a spot at February’s U.S. U18 WNT camp, and is a standout alum of more than one TDS Combine.

As if De Anza Force’s U16s need another strong attacking player to play alongside the likes of Luca Deza, Kayla Fong, and Samantha Tran, but leave it to the top ranked team in the nation to add NorCal NPL leading scorer Mia Root to the roster as a discovery player. Root’s home club is Davis Legacy, but she played with De Anza at the San Diego ECNL Showcase and earned a Best XI nod from TopDrawerSoccer.com. Another San Diego event standout was Real So Cal midfielder Samantha Fisher. Fisher is an attacking midfielder that is difficult to contain and when she’s not scoring, she’s providing her teammates with opportunities.

Not only has the IMG Top 150 received scrutiny, but the regional lists have been updated as well. Keep checking back this week as we unveil newcomers such as Lamorinda United defender/forward Katharine Larson, Continental FC Delco midfielder Julia Detwiler, Beach FC center back Aaqila McLyn, and many, many more.