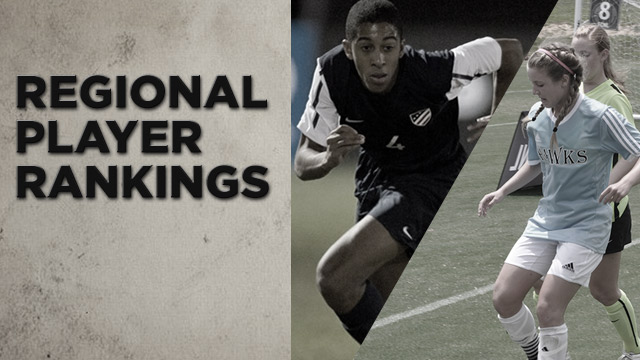 GK Stephanie Westaway, Lake Norman SC - Westaway attended ODP National Camp in 2014 and 2013, earned an honorable mention at the TDS Unsigned Showcase Raleigh in 2014, and attended the ODP Interregional in 2015. She is verbally committed to Clemson.

D Danielle Satterwhite, So Cal Blues – The center back was selected by TDS as one of the top players during the 2015 ECNL finals. She is verbally committed to UCLA.

D Brianna Morris, CASL – Morris first came on our radar way back in 2013, when she attended a US Club Soccer id2 Camp in Charleston, SC, and stood out for her vocal command of the back line. She is verbally committed to Charlotte.

D/M Sam Jerabek, Richmond United – The versatile Jerabek was named to the 6A all-state second team in 2016 for her performance as a forward at Clover Hill High School. The VCU pledge plays left back as well as center mid for Richmond United.

M Sophie Gorman, Kings Hammer Academy – Gorman, a Cincinnati verbal, is an Ohio high school all-star who also earned a daily best nod from TopDrawerSoccer.com for her performance at the 2015 Disney Showcase.

M Madison Elwell, Yardley Makefield Explosion – A fast, left-footed goal scorer, Elwell helped her team to a 6-1 record and a first place finish in the Red Division during the 2015-16 USYS National League. She contributed four goals, second most on her team and good enough for a top ten placement in the league as a whole. She is verbally committed to Vanderbilt.

M Demi Lopez, La Roca FC – Lopez is consistently one of the top players in Utah, where she commands the middle of the field for USYS National League participant LA Roca FD. She is verbally committed to Utah.

F Peyton DePriest, Tennessee SC – DePriest helped her Tennessee SC 16 team to a USYS National Championship in the U18 age group in July. She scored two goals during the event, including the game winner in the semifinal against Ambassadors SC. She is verbally committed to Middle Tennessee State(w).

F Sydney Spruill, CASL – As a representative of Region III, Spruill scored three goals at the ODP Thanksgiving Interregional in 2015, finishing the tournament as the leading scorer in her age group. She moved from Orlando City to CASL for her senior season, and is verbally committed to North Carolina.