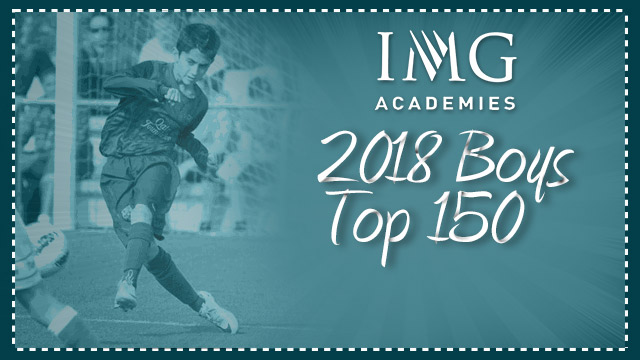 The 2018 Boys IMG Academy Top 150 club player rankings debut today. The top ten span the four corners of the country, with the top two already plying their trade internationally. Originally from southern California, FC Barcelona midfielder Ben Lederman is the consensus No. 1, with Boca Juniors forward Ryan Palmbaum in the second spot. Lederman has been living in Spain and playing for the Spanish club for the past three years, and since 2012 has been a regular participant with the U.S.’s youth national teams at the U14 and U15 levels when they travel to Europe. Like Lederman, Palmbaum moved out of the country several years ago, but instead headed south to Argentina, where he now plays for the prestigious Boca Juniors Academy.

There are two goalkeepers in this initial top ten list, PDA’s Hunter Pinho and Sockers FC’s Alexander Budnik, as well as two defenders: outside backs Zico Bailey and Gabe Kash. Pinho at No. 6 and Budnik at No. 10 have both impressed at the international level as part of the U14 Boys National Team, and both travelled with US Club Soccer’s id2 program to Italy in March of this year. Kash at No. 3, a member of the St. Louis Scott Gallagher Illinois U14 and U16 Development Academy teams, suffered an injury last fall that hindered his participation in youth national team camps, but made up for lost time when he debuted with the U15 BNT in March, impressing head coach Hugo Perez enough to be invited to Italy in April. Bailey, at No. 9, recently moved from Heat FC in Las Vegas to become a part of LA Galaxy’s Development Academy.

In addition to the IMG Academy 150 update, we will unveil the regional rankings throughout the week. Some of the players on our initial list include Dallas Texans forward Marcos Puga, Manhattan SC defender Tyler Ripley, Carolina Rapids midfielder Noah Dunn, Tampa Bay United midfielder Austin Amer, and many, many more. Keep checking back throughout the week to see who else made the lists.