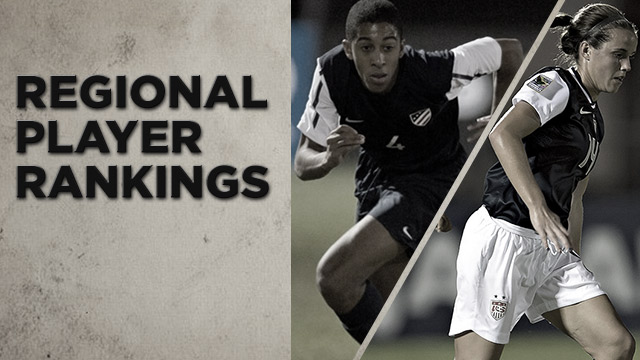 TopDrawerSoccer.com talks a lot about the outstanding youth players in the IMG Academy 150, but there are hundreds of others in each age group that deserve recognition too. So, each Friday following the Monday release of an IMG Academy 150 update, we highlight eleven of the regionally ranked players from around the country for that class. All were recommended for their respective regional lists by our network of scouts and coaches.

Haley Archuleta, M/F, Real Colorado – Multiple recommendations throughout the season got Archuleta added to this list, and her three goal performance against Dallas Texans at the ECNL playoffs was just the icing on the cake.

Amanda Martin, D, Orlando City – Martin, who formerly played for Sunrise SC out of Miami and now plays for OCity’s U16s, has been a member of the US Youth Soccer Region III team for the past two years.

Brooke Rincon, D, So Cal Blues – Rincon stood out for her performance in the Blues’ win over CASL at the ECNL finals. The center back kept CASL at bay all game and scored a goal off a corner, earning a spot on our list.

Jamie Goralski, F, Team Chicago – Goralski attended ODP National Camp in 2014, and was a standout on the left wing at id2 Arizona in 2015.

Emily Talmi, D/F, Placer United SC – Talmi has multiple accolades on her resume, including ODP and id2 selections. She also earned a Best XI nod at the TDS NorCal Combine in 2014, and has been scouted by a number of college coaches from around the country.

Elailey Hernandez Repreza, D, Legends FC – Hernandez-Repreza made her debut with the El Salvador U17 WNT in the CONCACAF Women’s U17 Championship when she was just 13. Since then, she has starred for Josh Hodges’ Legends FC ‘99s, scoring the game-winner in the 2014 USYS National Championship final.

Kiana Solomon, GK, West Coast FC – The starting goalkeeper for WCFC’s U15s that did just enough to win their group at the ECNL Playoffs and advance to the final, Solomon attends US Soccer Training Centers on a regular basis.

Olivia Basnett, F, Oklahoma FC – Basnett had seven goals and four assists during the 2014-15 regular season, and while her team struggled in the tough Texas Conference, where the top three teams all advanced to the ECNL Finals, Basnett was a bright spot.

Kathryn Carter, M, GSA – Carter made the almost 300 mile commute from Tallahassee, FL to play for GSA’s U14s during the 2014-15 season. The central midfielder attended ODP National Camp in 2015 and was a member of the ODP Region III team.

Kathleen Becker, M, Albion Hurricanes – Becker plays in the center of the park for Dylan Glad’s U15s that went 1-1-1 during ECNL playoffs.

Kristen Calderon, D, FC Dallas – Calderon, a center back for Ben Waldrum’s U15s, has attended camps for the U15 and U17 Mexico Women’s National Teams.