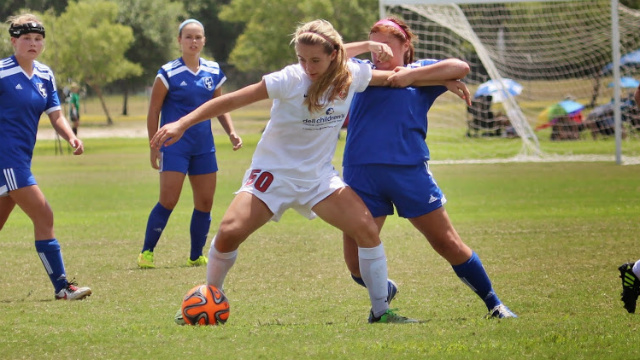 GK Sarah Peters, Sporting Blue Valley – Peters has earned two shutouts for SBV’s U18 ECNL team so far this season. She is verbally committed to Kansas.

D Gracie Schimmels, Oklahoma FC – Schimmels was a member of WPSL side Oklahoma City FC over the summer, along with club-mate and U16 GNT member Hensley Hancuff. She is a centerback for Oklahoma FC’s U17 USYS National League team during the regular season.

D Paige Thompson, Albion Hurricanes FC – Thompson plays on Albion’s U17 ECNL team that currently sits in third in the Texas Conference standings. She is verbally committed to Oklahoma.

D Madeline Gravante, Albertson SC – Gravante was singled out for her aerial ability at the ECNL New Jersey Showcase in May. She is verbally committed to Brown.

M Hayley Baer, NJ Stallions Stampede – Baer, an attacking center midfielder, made a verbal commitment to Rutgers as just a freshman, and has helped her team to a spot in the USYS National League for the 2016-17 season.

M Caylie Etherington, Seattle Reign – Etherington, a member of Crossfire Premier during the 2015-16 season, was singled out by TopDrawerSoccer for her performance in central midfield at the ECNL San Diego Showcase in 2016. She is verbally committed to Western Washington.

M Marisa Ling, FC Dallas – Ling was a member of the FC Dallas WPSL Southwest Conference champion over the summer, and has helped her FCD U17 ECNL team to an undefeated record of 4-0-3 to this point in the season. Ling was singled out by TDS for her pinpoint accuracy on set pieces at the 2016 ECNL playoffs.

M Sarah Hernandez, Eagles SC – Hernandez was invited to the U.S. U16 Girls National Team camp in Portland in May of 2016, and is a member of the Eagles’ U17 ECNL team that currently sits mid-table in the Southwest Conference.

F Olivia Stone, Lonestar – Stone, who plays on Lonestar’s U18 ECNL team, was a member of the ODP Region III team in 2015 and was a TDS honorable mention at the 2015 ECNL National Finals. She is verbally committed to Northwestern.