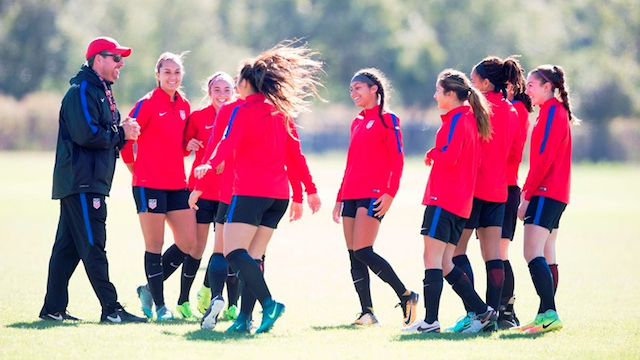 The U.S. U17 Women’s National Team begins the 2018 Concacaf U17 Women’s Championship on Friday at 10 p.m. (ET) from Nicaragua. USA is the defending champion of the regional tournament, which serves as the qualifier for the youth World Cup, and has won the event three times out of five. However, USA has never repeated as champion, which makes this year’s tournament a bit more historic.

This is the first U17 Concacaf Championship for USA head coach Mark Carr. He replaced BJ Snow as the head coach of this age group in April of 2017. Carr does have experience with the regional tournament though, as he led the U.S. U15 Girls National Team to the Concacaf U15 Championship in 2016. His team went 6-0 at the event with 49 goals scored and ZERO conceded. The expectation is this tournament will be a bit more difficult for Carr and his squad, which carries over only eight players from that successful U15 side from 2016.

USA takes on Costa Rica, Bermuda, and Canada from Group B play in Nicaragua. USA, clearly, enters as the favorite of the group and the tournament given the previous history of the team and the recent results of this age group. However, knee injuries to Lia Godfrey, Jordan Canniff, and Ainsley Ahmadian took a bite out of the creativity in the attack of this team, but they still have enough of a punch to put a few in the back of the net.

The challenge for this team will be if the individual brilliance can translate into team success. The playing style and player selection lends to a bigger reliance on individuals creating success in duels. Mexico has been the lone team from the region to consistently show the tactical know-how to handle that challenge.

USA will look to a few key players to be the catalyst of a successful trip to Nicaragua. Goalkeeper Angelina Anderson took over the starting spot on the team quickly after her first call-up. She’s a rare combination of size, instincts, and athletic prowess. She’s a great shot-stopper and a formidable wall when coming off her line. She should be the leader of a relatively experienced defense, which includes two U17 WNT veterans in Kennedy Wesley and Kate Wiesner.

Sophie Jones and Astrid Wheeler are very different in style, but they’re the likely candidates to line up as the defensive midfielder with this team. Jones is a connector with a brilliant soccer mind. Her schooling from Andres Deza has taken her from good college prospect to an international caliber player. Wheeler destroys the opposition’s passing lanes with her positioning off the ball and then she punishes players who try to dribble through the center. She’s a good passer too, but while Jones looks for quick connections, Wheeler looks for the long bombs to send her teammates behind the defense. Maya Doms, Croix Bethune, Mia Fishel, and Hannah Bebar are the rest of the midfield options for Carr. Bebar and Jones are similar in their thinking and approach, which could lead to a possession-dominant style from the USA.

The forwards on this team have been successful at every event in the past. Sunshine Fontes is the leading scorer with 13 goals. Isabella D’Aquila scored eight goals over the past year with the team. Both should get plenty of opportunities to add to that tally in Nicaragua. (Update: Samantha Kroeger replaced D'Aquila on the roster after an injury to her ankle forced the So Cal Blues forward to sit out the event.)

The three keys to a successful Concacaf Championship for the USA squad are a balanced approach from the squad, a lethal finisher, and a few prospects emerging. USA’s vulnerability in the past has been on the counter-attack when numbers are forward and players fail to account for the speed of the opposition. This team should be wary of the improving quality of the other programs in Concacaf. Previous USA teams have struggled when the expected scorers have been inconsistent in front of goal. This group needs one of the forwards to step up and be the go-to target in the 18-yard box. The last key for this group is to hope a few of the players emerge as prospects for the full women’s national team in the future. The goal of any youth national team is to identify the players on that pathway. This tournament is a great benchmark for judging which players are at international level.