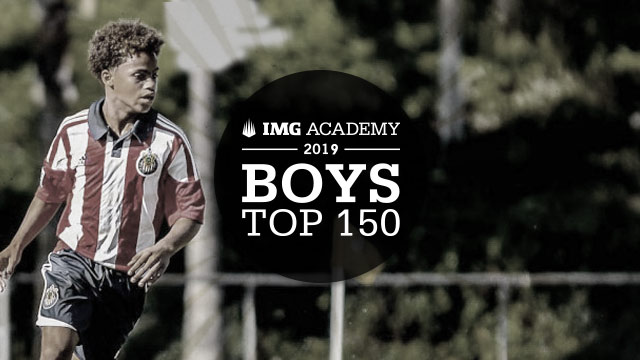 The IMG Academy Top 150 rankings update for boys in the 2019 graduating class is out today. John Hilton is still the top player in the land, but as the freshman season ends for players in this class, there are many changes to note.

Of those with youth national team resumes, FC Dallas forward BRyan Reynolds, and brothers William Sands and James Sands, among others, saw their stock rise over the last quarter. The Sands brothers, both U17 Residency members, were on the roster for the U17 Men’s National Team trip to India in May, and Will, a forward, scored twice in the U17 MNT 4-0 win over India. Reynolds continues to impress in the Development Academy, having scored 22 goals during the regular season. He played up with the U15/16 Academy at the showcase in Frisco and the goals kept coming, scoring three more over the course of the three matches.

Lonestar midfielder Axel Picazo, Crew Soccer Academy Wolves midfielder Kellan Landefeld, New York Red Bulls defender Jonathan Ned, and World Class FC forward Jorge Umana are others who climbed in the rankings with this update. Picazo attended US Soccer’s inaugural BNT Futures Camp last May, and has been on the radar ever since. He amassed 15 goals in 21 matches on Lonestar’s U13/14 Academy, and added five more in 17 matches with the U15/16 team. Landefeld had a spectacular showing at the Frisco Showcase, playing a match up with the U16s as well as two in his own age group. During the regular season, the wide midfielder racked up 13 goals. Ned’s performance in central defense against a stacked FC Dallas squad at the showcase helped his cause for a higher ranking, and it never hurts to get some positive feedback from multiple sources, too. Umana finished the regular season with 14 goals for the World Class U13/14 Academy, but went lights out at the postseason showcase, scoring five of his team’s seven goals, including a hat trick in their 4-1 defeat of Placer United.

A couple of players finished the 2015-16 season on enough of a high note to be added to the rankings. Tampa Bay United midfielder/forward Jeffrey Copper, Strikers midfielder Liam Duerksen, and Richmond United forward Key White all enter the IMG Academy 150 for the first time. Copper helped his team to a three match sweep at the showcase, and added five goals to his regular season total of 11. A composed central midfielder, Duerksen helped turn a lackluster regular season for Strikers’ 14s, albeit in the ultra-challenging SoCal conference, into a head-turning performance at the showcase, where they finished 3-0 with a goal differential of 11-2. White is Richmond United’s leading scorer, and added four to his total at the showcase, including three in the span of forty minutes on Thursday.

In addition to the IMG Academy 150 update, we will update the regional rankings as well throughout the next couple of weeks. Some of the players to be added include Kings Hammer Academy midfielder Michael Wampler, BW Gottschee goalkeeper Marcus Peterkin, Empire United outside back Kyle Hofschneider, New England Revolution midfielder Trevor Burns, San Diego Surf forward Michael Scavuzzo and many, many more.