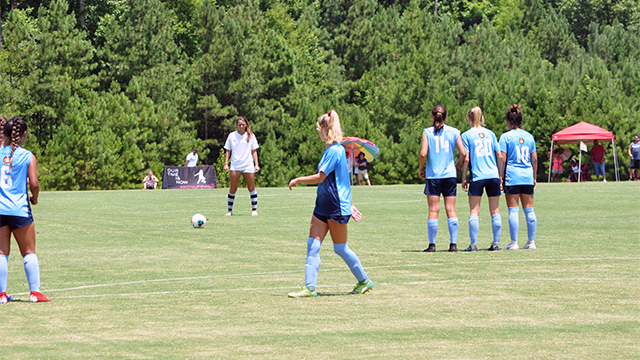 RICHMOND, Va. – Four teams made it past the finish line on the final day of the 2018-19 ECNL season, as champions were earned under sweltering skies in the Richmond area.

First to secure honors on Saturday was So Cal Blues, claiming the Under-16 crown. One goal separated the Blues and a tough and determined Michigan Hawks side, as a second half tally from Alyssa Mendoza provided the winning margin.

The oldest age group to compete saw PDA Blue score three unanswered goals, jumping out to a 3-0 lead in the first half against LAFC Slammers. After Slammers cut into the lead right before the halftime whistle, PDA Blue’s Kylie Daigle scored her fourth goal from the penalty spot to restore the three-goal lead, and ultimately win the championship.

In the third match of the day, it was a dream start for the GSA Under-15s, which jumped out 1-0 against PDA in the game’s opening minutes. Similar to Friday’s semifinal against MVLA, GSA dug deep, putting together a stout defensive effort while looking to hit on the counter attack. After keeping a zero into the second half, GSA got a second when Bailey Wagenknecht won a penalty kick, which was converted by center back Ashlyn Fernandez to make it a 2-0 game. The Georgia side kept its nerve and clean sheet to clinch the trophy.

It was the best for last in terms of excitement when it came to the Under-14 championship. PDA Blue had a shot at a second club championship and third on the day. Two goals in the first half had the New Jersey club up 2-0 at the half, both coming from Alexandra Barry. But LAFC Slammers FC came roaring back, as Kristine Ramirez Orozco cut into the lead with a finish at the far post before they tied the game with a blast from range. Barry scored her third goal of the game before it could reach extra time, however, and it proved to be the winning goal. With the championship, PDA Blue finished the 2018-19 club season with a perfect overall record: 32 wins in 32 games.

.@PDAGirlsSoccer U14s with what could be the GAME-WINNER!

Below are some of the standout performances spotted in Saturday’s championship games.