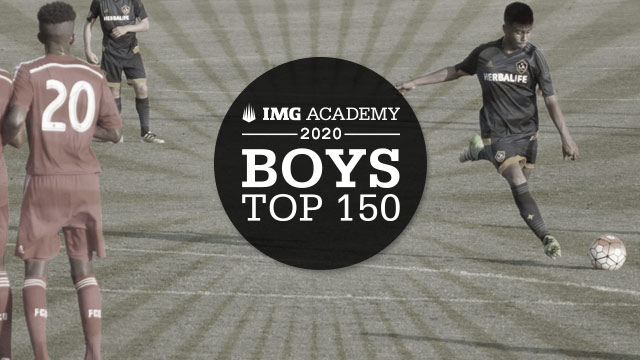 The IMG Academy Top 150 fall rankings for boys in the 2020 graduating class is out today, and LA Galaxy’s Efrain Alvarez remains No. 1, but there are a plethora of new players as this young group moves beyond middle school. New to the top ten (at No. 4) is Alfonso Ocampo-Chavez, whose performance at the latest U15 boys National Team camp proved he is the real deal. The Seattle Sounders forward was one of the breakout stars in Florida, and when not on national team duty has played with both the Sounders U14 and U16 Development Academy teams.

Other players new to the top 100 include DC United midfielder Nick Andersen, LA Galaxy forward Victor Cano, and Lonestar forward Kaya Ignacio. These three players have a whopping 29 goals between them in U14 Development Academy play this season, Andersen with six, Cano with 14, and Ignacio with nine. Cano has scored for the u16 Galaxy as well. And all three participated in the Florida U15 BNT camp in November.

A couple of other players making the cut for the first time include Kendall SC goalkeeper Mauricio Uribe, Sporting Kansas City midfielder Jonathan Munoz, and Virginia Development Academy center back Sebastian Falsone. Uribe has started two matches in goal for Kendall’s U16s as well as seven for the U14s this season, and was the starting goalkeeper for the U13/14 academy last year. Munoz attended adidas ESP camp in August, and is a regular starter for Sporting’s U16 Development Academy. Falsone is listed as a midfielder for VDA, but has started 11 matches in the center back role, scoring once.

In addition to the IMG Academy 150 update, we will unveil the regional rankings throughout the next few weeks. Some of the players on our list include Strikers forward Maximilliano Laguna, IMG Academy defender Henry Mader, New York Red Bulls midfielder Esteban Molina, Las Vegas SA midfielder/forward Lincoln Aguino, Albion SC center mid David Guzman, Lonestar center back Josh Ecton and many, many more.