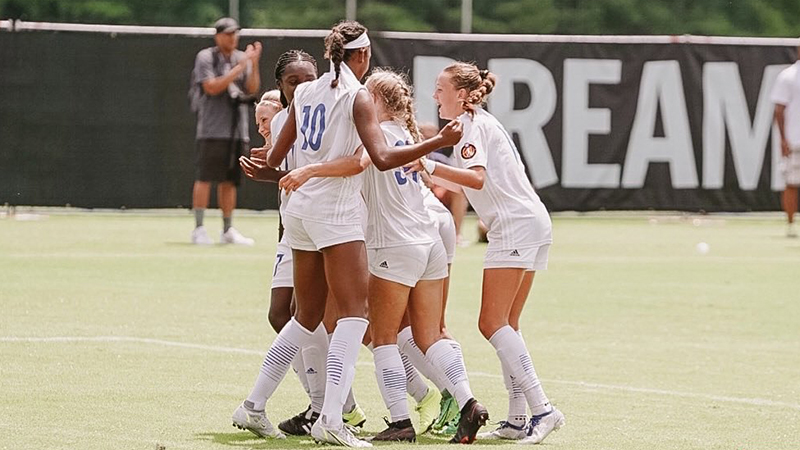 The 2020-21 Girls ECNL National Championship were crowned over the weekend in the Richmond, Virginia area.

After navigating through the pandemic, a looming hurricane during players, U13, U14, U16 and U17 titles were earned this past Sunday. A U15 winner was decided Monday morning, as KC Athletics defeated the San Diego Surf.

Check out the national champions from Sunday’s games.

Both Eclipse SC and LAFC Slammers played a pair of narrow semifinal matches to make it to Sunday’s final.

With the U13 teams shifting focus to Richmond instead of playing out the season in Florida, Eclipse clung to a narrow 3-2 win on Saturday to advance past Solar SC. A last-minute penalty stop played a huge role in securing Eclipse’s spot in the finale.

On the other side of the bracket, LAFC bounced back from conceding early, scoring three unanswered goals in a 3-1 win against San Juan SC.

Neither side managed a goal in Sunday’s final however, and LAFC Slammers secured the trophy on penalty kicks after a 0-0 draw.

U14: Solar cap off dominant campaign

It was a tremendous successful campaign for the Solar U14s, and the 2007s capped off a tremendous season by scoring seven goals in two games to bring home the hardware.

In Saturday’s semifinals, Solar soared with four goals, defeating LAFC Slammers by a 4-1 score. Awaiting in Sunday’s final was another California side, as the So Cal Blues scored a late winner to secure a 1-0 win over a tenacious Jacksonville FC side.

An attack that surpassed 100 goals in league play this season kicked into gear for one last game, jumping out to a 2-0 lead in the second half. So Cal Blues battled back and cut into the lead, but the Texas side tacked on a third to take it by a 3-1 score.

U15: KC Athletics triumph in three games in three days

A Mary Long goal turned out to be the decisive strike on Monday, as KC Athletics overcame the concession of an early goal to win the national title. KC defeated San Diego Surf by a 2-1 score.

The reshuffled schedule meant the U15 winner would secure three results in three days. KC started the weekend defeating WNY Flash Academy. Penalty kicks were required against World Class FC in the semifinals, setting up the final against the Surf.

San Diego faced a 1-0 early on in the quarterfinals against the Colorado Rapids. But after keeping the score close and weathering Colorado's attack, San Diego bagged two goals on the counter to advance. Penalty kicks were required in the semifinal against Solar SC after a 2-2 draw, where Surf won 3-0 to setup the final against KC.

Two powerhouse clubs battled it out under scorching sides, as LAFC Slammers managed a 4-2 win against PDA Blue.

The two sides traded goals throughout the game’s first 90 minutes, as PDA jumped out to a lead, only for LAFC Slammers to answer – getting the tying goal and forcing extra time. It was the extra stanza where the California side made it count, bagging two goals to bring home the club’s second trophy of the day.

The 2004 MLVA side won a second ECNL National championship in three attempts. Back in 2018, the California club team won the U14 age group, and made it to the national finals against in 2019.

This year, MVLA had to best two of the nation’s best club sides in order to triumph. After edging Solar SC in a narrow match on Saturday in the semifinals, MVLA got a lone goal from Jasmine Aikey to defeat LAFC Slammers and deny the SoCal power a third national title on the day.