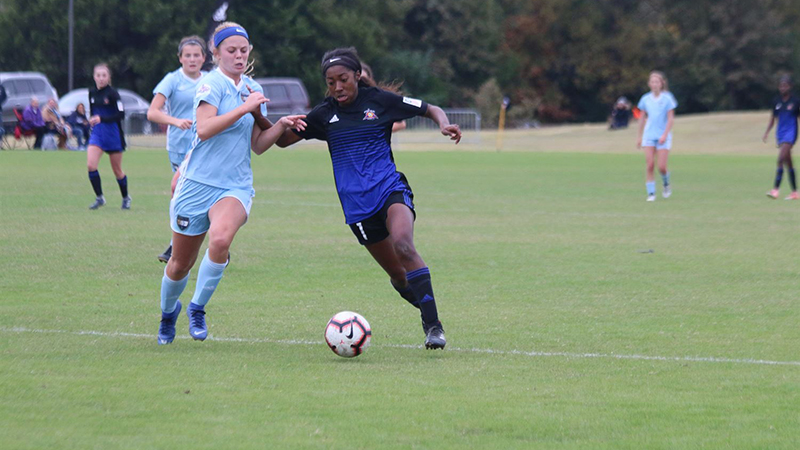 The six age groups in the Girls ECNL are set to compete at this year’s National Playoffs at the Premier Sports Complex in Lakewood Ranch, Florida.

The Under-13 and Under-18/19 teams will crown a champion in Florida, while the other age groups will contest group games and a knockout matchup to secure a spot in the national finals in Richmond.

Preview each of the age groups below.

It’s simply a knockout tournament of 16 teams at the youngest age group. Playing mostly against regional competition, the time in Florida will offer a measuring stick to see how these teams stack up against one another.

Crossfire Premier and San Juan SC had perfect records playing 12 and seven games respectively, and are the top two seeds. Several prominent clubs send teams to this one, including PDA Blue, Real Colorado and Tennessee SC. California and Texas sides can’t be counted out either, as LAFC Slammers, So Cal Blues and Sting Dallas Black have all put up gaudy numbers on the season.

There should be plenty of goals to come at this age group, with a talented pool of 32 teams set to compete.

The variance between games plays, like for all the teams here, will be an interesting factor. As an example, Solar, a team in Texas, played 22 times, while Northern California squads San Juan SC and MVLA played just seven. Of course, some numbers can’t be ignored, such as Solar’s whopping 108 goals scored during those games. Internationals SC scored 80 times and conceded just 12 in 18 games.

Real Colorado National will look to give So Cal Blues a difficult time, as the two Top 10 Champions League sides line up against each other. Other prominent club teams are sure to put their best foot forward in Florida, whether it’s PDA Blue, Crossfire Premier and Indiana Fire Academy.

Another triple-digit Solar team should be one of the headliners here – the Texas side was a 4-4 draw against FC Dallas away from a perfect 2020-21 campaign. Amalia Villarreal is one of several key players that help Solar excel.

The variance of games played this season will be felt in some of these groups – at least when examining teams from a statistical perspective. Well-known club sides such as Minnesota Thunder Academy and MVLA didn’t play a large number of group games – how that impacts them in Group E, for example, with So Cal Blues and WNY Flash in the mix, means that the stakes will be high and games unpredictable.

With 13 games played, San Diego Surf carries the distinction of fewest goals conceded in conference play with just on; and having scored 55 during that stretch the offense is there in a tough Group C.

The top three seeds at this age group – PDA Blue, Real Colorado National and Richmond United – won all off their conference games during the 2020-21 season. Thought it’s worth noting that PDA lost all three of its games at the ECNL Event in NC and Richmond United did pick up a loss and some draws during their travel. PDA will certainly be pushed by a group that includes a very good Davis Legacy side that played a small schedule this season. Also in Group A is a talented Heat FC side that includes Andrea Leyva, a side that qualified for the U14 national finals back in 2019.

Real Colorado faces a tough group as well, with FC Dallas, Florida Elite and Michigan Hawks. All three of those sides produce a high level, and depending on each team’s form, could certainly stake a claim to win Group B. Jaden Thomas is one of the top-ranked forwards in the class of 2024 and will look to make her mark here for FC Dallas.

Looking for other teams to watch, DKSC heads to Florida after winning seven straight games to finish the season. Keep an eye on midfielder Jade Martinez, who has experience playing in Mexico’s youth setup. Crossfire Premier and GSA will battle it out in Group E alongside So Cal Blues and World Class FC in what should be an extremely tight and close race.

Another age group with plenty of potential for goal-scoring, some of the best offenses in the ECNL are set to compete here. It doesn’t even start at the top seed, as Real Colorado National was anchored by a stout defense, one that conceded four goals in 10 conference games. The team’s lone loss came at a national event against the No. 2 overall seed, Concorde Fire Platinum. Drawn in Group A, the Georgia side will be certain contenders.

Looking at the two teams from Texas is where things really pick up. FC Dallas and Solar SC both bagged 80 goals in 21 conference games, holding a big edge in games played over counterparts from most other states. Solar has ample attackers that have carved up defenses across various leagues including Texas A&M commit Sydney Becerra, Treasure Byars, Truth Byars and Tyler Isgrig.

Twists and turns should be expected in Group G. MVLA played just seven games in conference, but are very talented and a well-coached team that will look to get ahead of Michigan Hawks, McLean Youth Soccer and Match Fit Academy. MVLA’s attack is led by Stanford commits Allison Montoya and Amalie Pianim.

A knockout tournament will crown a champion at the oldest age group in Florida, with 16 teams involved. It should certainly produce some wild and entertaining games, with player availability certainly playing a factor. As an example, Solar SC ran up the score in conference play, scoring 128 goals in 18 games. If Trinity Byars and Lexi Missimo return to the team after a spring season at Texas, that would certainly tilt the table in their direction. Even without that duo, Solar has a strong side featuring a slew of DI signees, including Quinn Cornog, Macy Blackburn, Makhiya McDonald. Jaedyn Shaw is also the top-ranked player in the class of 2023 leading the front line.

The top two seeds, So Cal Blues and PDA Blue, are both certain contenders. The Cali side may not have the same level of prolific attacking talent as past seasons but knows how to win games. Reinforcements could be on the way for Florida as well; 2020 grads Reilyn Turner and Tatum Lenain are on the roster, and as 2002s, are age eligible. PDA possesses plenty of defensive nous, conceding just one goal in conference play. There are the small-sample size unknowns, like Eclipse Select SC and McLean Youth Soccer; teams that played single-digit conference games that didn’t put up gaudy numbers but has the talent. With a smaller field, it could be a relatively wide-open race across the board with ample upsets as players get one last taste of club soccer before starting their college careers later this summer.