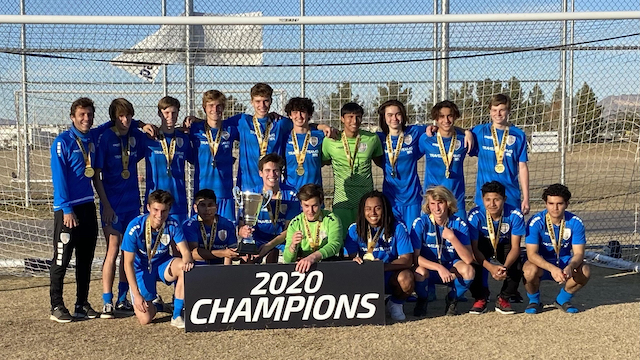 Surf Cup is often viewed as the major club event that kicks off a new season. With the academy/ECNL championships wrapping up last week and Surf Cup happening this weekend, there is no off season in club soccer anymore.

After missing out on the traditional timing of Surf Cup in 2020, the event is back with a bang in 2021. Some of the top Girls ECNL teams are signed up for the tournament. As well as some of the top club teams from all over the country on the boys side. Check out some of the teams and players to watch from the Best of the Best Flight at Surf Cup below.

Albion SC 04 had a breakout campaign during the 2020/2021 season. The squad won the Southwest Division of the MLS Next for that age group over the two MLS academies. The team is now combined with the 2003s at the club and looking to improve on that already stellar showing with a championship at Surf Cup.

That task will not be easy with perennial favorites Crossfire Premier ECNL also in Group C. Pateadores and Santa Rosa United round out the group.

DMCV Sharks 04 ECNL is another team to watch at the event. Sharks won the Southwest Conference in the Boys ECNL last season and is one of the local favorites in that age group. Sharks faces a trio of other ECNL clubs in Group A: Davis Legacy, Eastside FC, and Placer United.

After finishing second in the Southwest Conference during last season, Strikers FC will be one of the teams to watch in this age group. With Strikers joining MLS Next for the upcoming season, this could be the last test against some ECNL foes. Strikers face PacNW, De Anza Force, and LAFC SoCal (formerly Real So Cal) in Group B. PacNW is no push-over either. The Washington club was close to advancing during the Boys ECNL playoffs after going 2-1 at the event.

Crossfire Premier has some of the top talent in Washington from the 2023 and 2024 graduating classes, which should make this one of the top teams to scouts for college coaches at the event. Crossfire went 12-2-3 in the Northwest conference of the Boys ECNL last season. Crossfire takes on Atletico Santa Rosa, Albion SC MLS Next, and Pateadores are also in Group C.

Strikers FC is the top dog in this age group. The Cal South team won the Southwest Conference in the Boys ECNL last season with a dominating 13-1 record. Marin FC was one of the top teams from Northern California though, which should offer an exciting game from Group A. Eastside FC and San Diego SC are also part of Group A.

Crossfire is bringing both of the teams in this age group to Surf Cup. One team is in Group B along with Davis Legacy, LAFC SoCal, and LV Pros. The Las Vegas squad typically is a hot spot for MLS academy scouts.

The other Crossfire squad faces off against MVLA, Hawaii Rush, and Albion SC MLS Next in Group D. Hawaii Rush might attract a few scouts as well at the event.

The 07 age group has teams from all over the country. Achilles FC (Maryland), Cadence SFC (Illinois), and El Paso Select (Texas) had to travel a couple of time zones for the tournament. Achilles takes on Davis Legacy ECNL, Pateadores, and Albion SC MLS Next in Group D.

Cadence SFC takes on San Diego Surf, PacNW, and MVLA in Group B. Surf is one of the favorites in this age group after success in the Boys ECNL and Dallas Cup last season.

El Paso is in Group A with San Diego Soccer Club ECRL and De Anza Force.

There are some of the best teams in the country in this age group at Surf Cup. HB Slammers Koge, formerly LAFC Slammers 04, is the top team in Group A. The team is competing in the ECNL Finals Week so fatigue has to be of some concern for the group. Crossfire United, Santa Rosa United, and Legends FC are also in Group A.

Group B is stacked as well. Crossfire Premier, Mustang SC, So Cal Blues, and Beach FC (the new squad to the ECNL) are the four teams in this group. It’ll be a college coaches paradise on the sideline of those games as they get a close look at some of the top talent from 2022 and 2023 classes.

Utah Avalanche, Slammers ECNL, San Juan Soccer Club, and Real So Cal are the teams in Group C. Utah Royals FC-AZ is another new club to the ECNL for this upcoming season and they highlight Group D. San Diego Surf, LA Breakers, and Eastside FC are also in Group D.

City SC is flying the flag for the Girls Academy. They are the lone non-ECNL team in this age group. City faces So Cal Blues, De Anza Force, and Beach FC in Group C.

Slammers HB Koge, San Juan Soccer Club, Crossfire United, and Sporting Arsenal are in Group A. Slammers is probably the favorite in the age group after going 18-1-1 in the ECNL last season.

Crossfire Premier has one of the top teams in this age group as well. The Washington club went 2-1 during the ECNL playoffs including a win over So Cal Blues. They will face off against Davis Legacy, LA Breakers FC, and Slammers FC.

San Diego Surf is in the spotlight in the 2006 age group. Surf went through the ECNL regular season without suffering a defeat (15-0-4). The local side will take on Crossfire United, Mustang, and Beach FC in Group B.

Washington Premier was one of the top teams in the ECNL Northwest Conference in this age group last season. They went through conference play without a loss. There is a big challenge for the group ahead in Surf Cup. Washington Premier is in Group A with Slammers FC Koge, Utah Avalanche, and Strikers.

The second Girls Academy team of the Best of the Best flights is in the 2007 age group. City SC GA takes on former league rival Utah Royals (a new addition to ECNL for this upcoming season), LA Breakers, and Mustang in Group B.

So Cal Blues and Crossfire Premier were two of the top teams in the 07 age group during the ECNL season. Blues advanced to Finals Week so fatigue could be a concern for the team. They are in Group A for Surf Cup against San Juan SC, Washington Premier, and Legends FC.