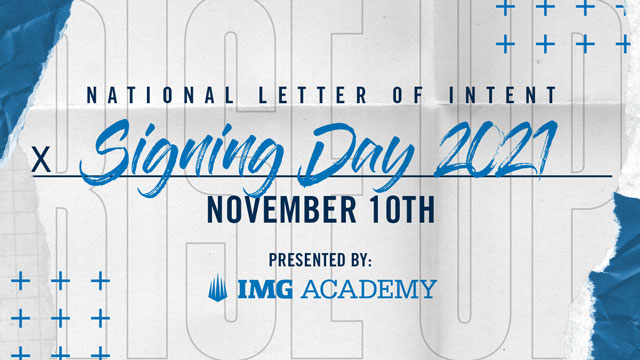 It’s time for the class of 2022 to sign on the dotted line this week, as National Signing Day officially opens the window for this year’s seniors.

TDS will be covering all the action, in partnership with IMG Academy, starting on November 10. It will stretch into the new year as transfers, international signings and late commitments come into consideration.

Be sure to bookmark this page, where live coverage will be available throughout the day starting on Wednesday.

9 a.m. -- It's the start of the business day on the East Coast, and things are sure to get started soon. In the meantime, fans of DI women's soccer can check out our bracket analysis of this year's draw. Girls Academy League side TSJ FC Virginia has gotten things started. Check out their full list of commitments for 2022.

First up, we are ecstatic to announce The Girls Academy player Courtney Andersen. She has been w/ #FCV for over 7 years & will be playing soccer for @virginia_tech

We're so proud of ALL of your accomplishments & can't wait to cheer you on as a #Hokie pic.twitter.com/adkRat3llt

9:30 a.m. -- A pair of DI women's soccer programs that didn't make the NCAA tournament have started unveiling their classes. Michigan State and Pittsburgh both had solid fall seasons and are bringing in some intriguing talent that should continue their improvement next season. Check out their Twitter accounts for the full details.

9:50 a.m. -- This year's photo gallery is now up and running. Make sure to submit yours to editor@topdrawersoccer.com.

10:05 a.m. -- More announcements are rolling in. That includes the No. 17 ranked player from the class, Mackenzie Gress, who is heading to Penn State.

“An incredibly talented goalkeeper, Mack brings great leadership and personality to our program. Her work ethic and growth mindset will make her a fantastic addition to our GK pool. She has a bright future, and we are so happy to have her join us here in Happy Valley!”#WeAre pic.twitter.com/2KnwKPErkW

10:30 a.m. -- A huge game is this week for South Carolina, facing North Carolina in the first round of the NCAA tournament. The Gamecocks kicked off the class of 2022 announcement on Twitter by confirming the addition of Dru Drake.

11:15 a.m. -- Don't forget to get involved in the 2021 TDS Bracket Challenge for the DI women's soccer tournament. Deadline is Friday at 3 p.m. Lots more announcements are coming in, though still waiting on the first press releases. Florida has started a nifty thread to celebrate its signees.

11:20 a.m. -- Signing Day revelations are rare, though do happen. Clemson announced the addition of Terry Watson, a local Boys ECNL standout. Can he go on to establish himself as a regular at the ACC power?

11:45 a.m. -- Poised to bring in a solid class after finishing the 2021 season well, Oklahoma has started to unveil its additions for 2022. Marianne Baltmanis got things started earlier today.

12:15 p.m. -- It's appreciated to see BYU cut to the chase. Here is their eight additions for the class of 2022 as the national seed looks to make a run in the NCAA tournament starting this weekend.

12:30 p.m. -- Congrats to another club from Virginia, as Virginia Development Academy sent in their 2022 grads in the nifty graphic below. It's from the Girls ECNL 03/04 squad. 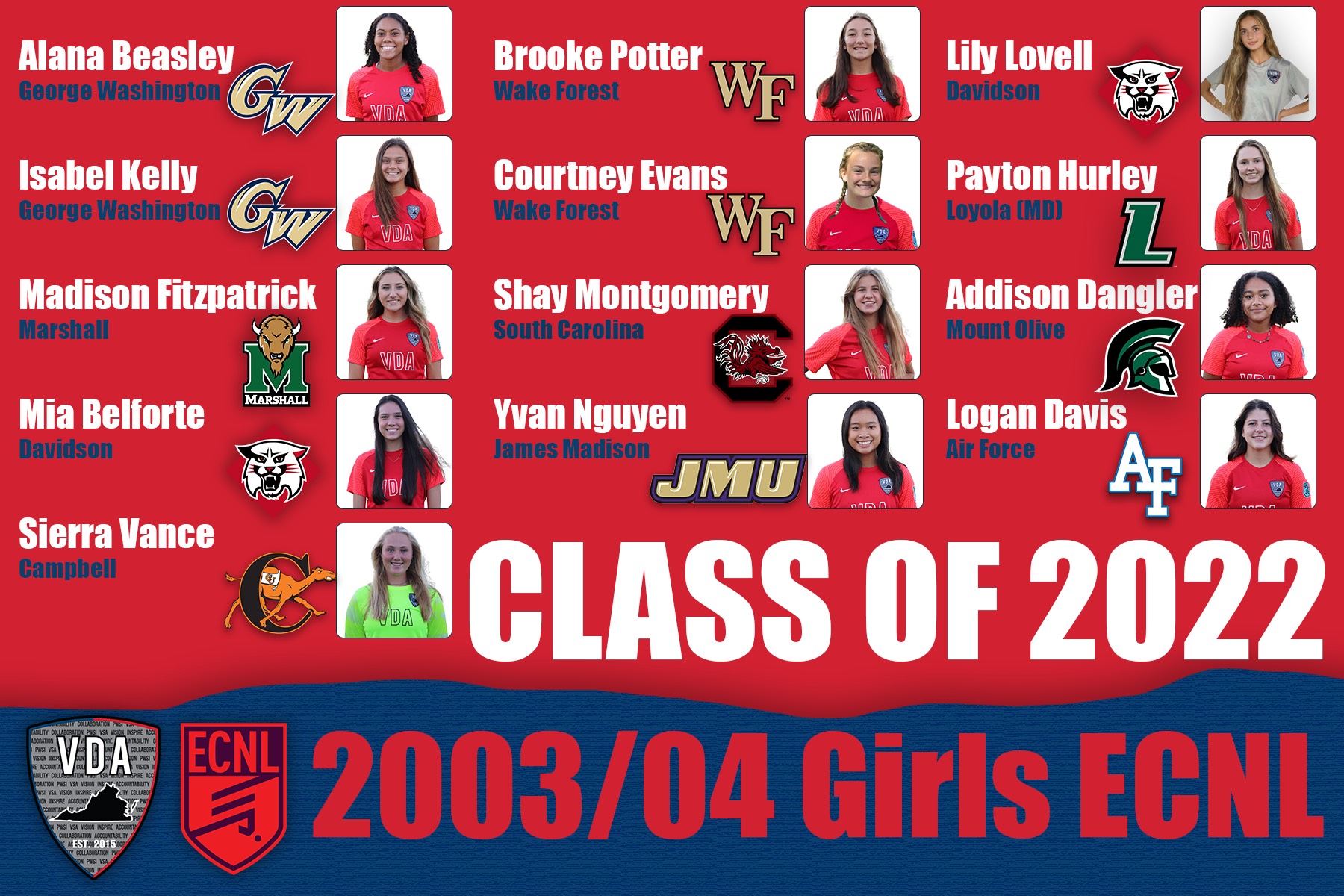 12:35 p.m. -- Speaking of big graphics from clubs, Solar SC has a long, long list of players heading to play college soccer from its boys and girls teams.

Congratulations to all Solar players who are signing their National Letter of Intent today!! Solar Nation is very proud of you. #solarnation #solarproud #weare solar pic.twitter.com/LijAedz5Fv

1 p.m. -- Injuries have limited High Point after a stellar spring season. But the Panthers are set to bring in a solid class in 2022 once again. If you're looking for an under-the-radar player to know, remember the name Jefferson Amaya, a top player at Charlotte Independence in the Boys ECNL. Amaya was confirmed as a 2022 signee today.

1:20 p.m. -- Already with one of the top goalkeepers in the country on the roster in Angelina Anderson, California announced the signing of So Cal Blues standout Teagan Wy, the No. 18 ranked player in the class of 2022.

We're so excited to welcome Teagan Wy to the squad!! 🤩 pic.twitter.com/HA0A5cXICQ

2:40 p.m. -- Earlier in the morning, Penn State confirmed the addition of Amelia White, the No. 2 player in the class. No. 1 recruit Elise Evans is based on the West Coast, so she'll be signing her NLI to Stanford shortly.

2:45 p.m. -- International additions are usually a bit more sparse on Signing Day, though players heading from Canada to NCAA programs pop up. Vancouver Whitecaps standout Andrea Kraetzer is heading from British Columbia to Arizona State, where she'll play in the Pac-12.

3 p.m. -- One of the highest-ranked players from the 2022 Boys IMG Academy Player Rankings to have an official announcement put out is Wyatt Borso, who checks in at No. 49. He'll head to Notre Dame in the fall, as the ACC side has lined up another Top 10 class at the moment. Borso will be key if Jack Lynn leaves school after this fall.

Can't wait to see the forward playing at Alumni next year.#GoIrish☘️ pic.twitter.com/LUttBQWivL

3:40 p.m. -- It was another challenging season in the ACC for Boston College. Another solid recruiting class is lined up so far, at No. 20 in the most recent recruiting class rankings. The program confirmed the additions of six players on Signing Day.

4 p.m. -- There was an international addition made by UCF today. Watson heads to Central Florida from Manchester United's Academy and the England youth setup.

6:30 p.m. -- Currently the No. 1 recruiting class, UCLA started to confirm 2022 additions, announcing America Frias, Ellie Walbruch and Ally Lemos so far. Keep tabs on their Twitter account for the latest.

7:45 p.m. -- One of the top boys clubs on the East Coast, Baltimore Armour is sending players to several major DI programs. 8 p.m. -- No. 6 recruit Juliauna Hayward is heading to Colorado, the program confirmed in the last 30 minutes. It's a big boost for the Pac-12 side, nabbing the state's top player in the class of 2022. 8:15 a.m. -- Tarleton State is joining Division I in women's soccer next year, and the Texas school announced 16 newcomers for the class of 2022. It's not too late to submit your photos either. Send them to editor@topdrawersoccer.com, and check out the updated photo gallery.

8 p.m. -- There's the No. 1 ranked player, Elise Evans, announced on the Stanford Twitter feed. It's also the first member of the Stanford class to be announced, as a class with a very local feel heads to the Farm. More updates to come tomorrow.

9 a.m. -- One of the fallouts from the pandemic and the lack of soccer could be a slight rise in pro academy players getting to play college soccer. With teams in MLS and USL looking to save on costs, some development teams were shuttered. Keep an eye on Wake Forest's class in men's soccer, as they've already announced players from the New York Red Bulls and Philadelphia Union academies.

12 p.m. -- Sticking in the ACC, Clemson announced nine additions for the class of 2022. It's an extremely impressive group at this stage, with standouts like James Kelly and Nathan Richmond bolstering a team that has lofty ambitions on a yearly basis.