CARSON, California – January’s weeklong trip to Mexico was an important building block in the maturation of the U.S. U14 Boys National Team.

This week’s national camp at the Home Depot Center is yet another.

A group of 38 players – the same group that journeyed to Mexico with the exception of seven new additions – has gathered at its West Coast home base in order to progress the development of a few promising young players. 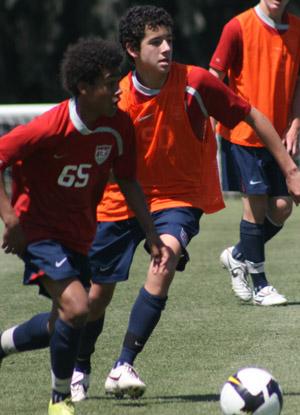 BNT campers practice on Monday.
“Our main goal is to see progress from one camp to the next,” said U14 coach Manny Schellscheidt following Monday’s training with the team. “We’re raising the bar and challenging their thinking of the game. We selected these players because we think they have more of a soccer mind. We want to give them one week of soccer they wouldn’t normally get.”

Well, this certainly qualifies. The team will undergo two-a-day trainings for the majority of the week and be tested in exhibition matches against clubs like Chivas, Arsenal, LA Galaxy, Cosmos West, Pateadores and the Irvine Strikers.

On an 80-degree day at the Home Depot Center on Monday, the group went through some basic drills and was paired off into mini 3v3 and 6v6 matches.

The national camp environment is still a new one for most of these players, particularly the seven who did not make the trip to Mexico: Marc Calderon, David Chavez, Andre Garcia, Holden Hmiel, Christian Pulisic, Christian Ramirez and Martin Salas.

Midfielder Peter Schropp, who was a part of the traveling group, feels that much more comfortable at this camp and can sense the change in his teammates as well.

“We all function as a team much better,” he said. “This is my second trip (to national camp). The first time I wanted to show myself but now I want to let it come to me. I’m hoping in the end I can raise my play.”

Benjamin Swanson, a small and shifty midfielder, has an even more tangible goal: he wants to play well enough to earn a spot for the next U14 camp in June. Playing with the Columbus Crew, Swanson relishes these weeks as they give him an opportunity to see the game through the lens of other regions across the country.

“(Soccer is played) differently on the West Coast then it is on the East Coast so I get to see things that players on the West do,” Swanson said. “You get to see how you compare with players. It’s also nice to see friends that you only see a couple of times a year.”

According to Schellscheidt, the focus this week will be on-the-ball training. Recognizing his pupils are young and have absorbent minds, he’d like to see them develop a freedom in their play and establish instincts that won’t inhibit their potential.

“Right now at their age their bodies and the ball don’t allow them to express their great ideas,” he said. “In time we hope to get them to the point where they can. Great players lead with the mind and the body responds. You see too much soccer where the body and the ball get in the way.”