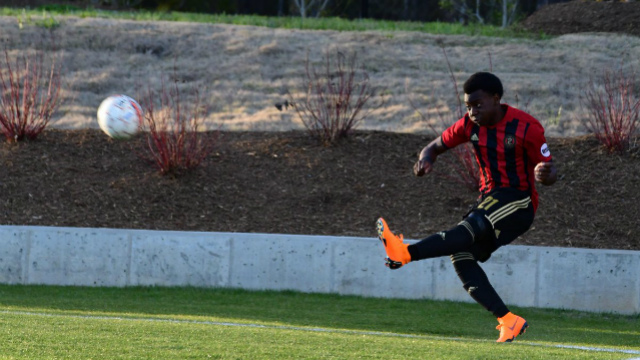 Fast-forward to the start of 2018 and plenty has changed. Atlanta United 2 was launched, offering a platform for youngsters like Bello to jump into pro soccer if ready.

And over the weekend, Bello earned his first professional start, playing 90 minutes for United’s USL squad in a 2-2 draw against the Charlotte Independence. On the back of an up-and-down team performance for Atlanta’s academy side at the Generation adidas Cup, Bello made the trip to North Carolina to get his first taste of professional soccer.

At just 16 years old, it wouldn’t have been a surprise to see the left back struggle. Perhaps he would be taken advantage of by older, more experienced attacking players. However, for the U.S. U17 captain, it was far from the case.

From the opening minute, Bello looked comfortable at his spot. He was exposed on a few occasions as the game progressed, though it was an energetic and exciting performance. Eager to get forward, Bello combined well (for the most part) with his teammates. A connection with Jose Carranza in the final third, led to Bello influencing the opening goal – an own goal – as he got into the mix often.

His action map shows just how far forward Bello likes to play. Atlanta, for the most part, looked similar to the MLS team, playing out of the back and looking to get forward. It wasn’t a flawless debut, as one could imagine. There were times that the 16-year-old was caught out of position, allowing the Independence to get in behind to create chances. Up 2-1 late in the game, Bello allowed in the cross that resulted in the game’s tying goal – even though he was hardly the only Atlanta defender culpable.

Regardless, Bello looked the part, and it wouldn’t come as a shock to see him get some run in MLS or the U.S. Open Cup this year. For even more, check out this extensive GIF thread from Adam Belz on Twitter.

The other youngsters on Atlanta United 2 deserve a mention as well. Christopher Goslin earned a start in central midfield and was comfortable deployed in a slightly more advanced role. The U.S. U17 MNT veteran completed passes at an 86.8% clip, with the majority of those in the Independence half. Carranza also slotted into the starting lineup, creating four chances from an attacking midfield role, which led the team. Draft picks Jon Gallagher, Oliver Shannon and Miles Robinson (from 2017) started in the draw.

Lagos Kunga, who signed a Homegrown deal with Atlanta at the same time, danced through the Independence defense to give United the temporary lead. From the looks of it, Atlanta United 2, both from a #PlayYourKids perspective and simply an entertainment value, is a team to watch in the USL this season.

ATL, you know what to do 😏@LAGOSKUNGA is nominated for @USL Goal of the Week! Vote Now: https://t.co/86OZk901hy pic.twitter.com/YD2OaLCh1h

Redding fails to seize his chance

When Tommy Redding was traded to the New York Red Bulls, it seemed like a huge opportunity for the former U.S. youth international to reboot his career. With the Red Bulls starting a younger group against Orlando City with one eye on a mid-week Concacaf Champions League matchup, the 21-year-old slotted into central defense.

And based simply on the highlights, it wasn’t the performance Redding would’ve aimed for, to give Jesse Marsch something to think about. He got caught ball-watching, letting Justin Meram in behind to setup Orlando’s first goal; was slow on the offside trap that let Chris Mueller in for a header that required a tremendous save from Luis Robles; and both him and right back Kyle Duncan were slow to react on a quick throw that was converted by Dom Dwyer.

The central defender is still young and has upside, though his lack of match sharpness was apparent in this clash. Redding is likely to see most of his minutes with the Red Bulls II team in USL, barring a huge spike in form.

Young Philadelphia defense come apart in the second half

Auston Trusty resumed his spot in central defense for the Philadelphia Union, and he was joined in the starting lineup by left back Matthew Real, with the latter making an MLS debut.

After a decent enough start through the first half – which included Real making a goal-line clearance from a set piece – the wheels came off in the second half. Colorado Rapids forward Dominique Badji scored a hat trick, as the hosts ended up 3-0 winners. Real was slow to react on the second goal, as he kept Badji onside after a deflected shot in front of Andre Blake’s net.

Pinning mistakes on one player would be unfair, of course. Philadelphia started the youngest back line in the league’s history during that loss, as Jack Elliot (22) and Keegan Rosenberry (24) joined Real and Trusty at the back. The learning experience is certainly the only positive outcome, as the Union look to remain competitive in the Eastern Conference while relying on young players in crucial spots.