Following is a look at the standings and recent matches in the U16 age group of the USSF Development Academy.

The only other contest in Texas over the weekend was a 3-3 draw between Houston Dynamo and Texas Rush/AJ Auxerre. Alan Arellano scored twice for Houston, with Jorge Andrade adding the other tally. Texas Rush got a hat trick from Kekuta Manneh. The teams remained tied atop the division at 29 points each, but Texas Rush has a game in hand. 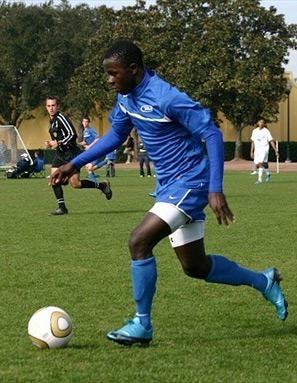 Kekuta Manneh, Texas Rush
Rush had beaten the Illinois version of Scott Gallagher 2-1, with goals from Matt Marchena and Evan Young. While Faik Hajderovic scored for Metro. Tyler Swanner scored the winner for Metro in a 1-0 defeat of Real Colorado.

Gallagher Missouri has moved to within two points of first-placed Sporting Kansas City, and have a game in hand vs. the Kansas side.

Great Lakes Division
Vardar are still on top and should be a good shout for a wildcard spot, but they are sitting ducks as far as the division crown goes. Both Columbus Crew and Chicago Fire have more than enough matches left to overtake the Michigan giants. Crew will host Chicago on June 12 in what could be a winner-take-all match.

Liberty Division
FC Westchester has the inside track on the division title with 18 points from 7 matches, and 3 games remaining to be played. Two goals allowed in 7 division matches played has been the key to the Greater New York City club’s success. Cosmos Academy East and Albertson SC wait in the wings.

Mid-Atlantic Division
PA Classics have four pivotal division matches to see if they can stay atop the division. Stephen Klein’s team is at 24 points from 10 matches, with FC DELCO (21/10), DC United (18/9) and Baltimore Bays Chelsea (17/9) trailing.

Northeast Division
If Empire United can win on the road at Seacoast United this Sunday, they will clinch the division title. The Western New York side has 20 points from 9 division matches, with only New England Revolution standing a mathematical chance to catch them.

Southeast Division
Concorde Fire has won the division with an 11-0-2 record, with one match remaining Adrian Powell’s team has an impressive 39-6 goal difference in division play.

Northwest Division
Cal Odyssey leads Seattle Sounders in the home stretch here, but the Seattle team has 3 games in hand despite trailing by just 1 point. The teams square off in Northern California on June 11.

So Cal Division
Is the best team in Southern California from Arizona? Don’t look now, but Real Salt Lake/AZ leads the division with 31 points from 15 matches. Real So Cal has the most realistic chance to overtake the MLS academy side, but will need the Arizonans to stumble badly in three home matches down the stretch – not likely.

RSL shutout Chivas USA 3-0 on the weekend, with Danny Gavin scoring twice and Joshua Goss once. Jose Navarro and Nick Semintendi scored in a 2-0 win over LA Galaxy. Joey Speshock recorded shutouts in goal in both matches.