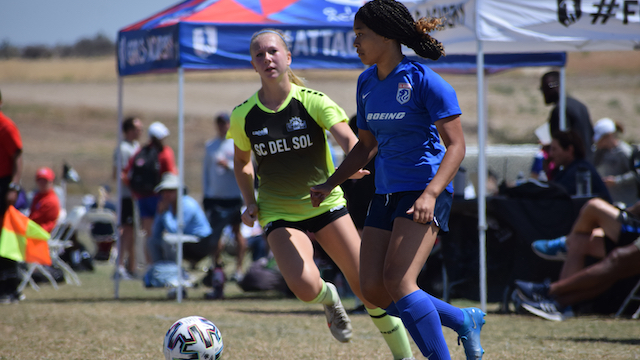 Saturday was a fascinating display for the Girls Academy League. The playoffs are officially underway for every age group. While many teams have now departed the venue after their three games have run the course, a new set has descended.

The event organizers has handled the challenges of hosting that many players, teams, spectators, and college coaches remarkably for a new league. The college coaches are crowding the sidelines to make up for lost time on the recruiting grind from the past year.

With so many eyes on the games, there is an added pressure on top of the even immense pressure of the players. The high pressure environment is leading to more teams playing the boot and hope style.

However, not every team is falling into the safe route of kicking it up the field and chasing after it. Watching Albion SC 07 San Diego had me lightheaded as they knocked the ball around with purpose, a clear identity for the team.

The result of the game did not go Albion’s way, but the future looks bright for the group. Oklahoma Energy, which had some good spurts too, ended up as the group winner. Cincinnati United, Lou Fusz, and Weston FC also advanced from the 07 age group into the semifinal round.

Lou Fusz, NEFC, Tophat Gold, and Oklahoma Energy advanced to the semifinal round from the 08 age group.

The 05 and 04 age groups were also in action on Saturday. Check out the individual standouts from the games below.